Stay informed on the latest news and analysis about public education in Duval County.

As a companion to our new policy brief, Understanding and Updating School Grades for Florida's Future, a new online tool lets you explore the impact of possible changes to school grades on the state, your district or your school. 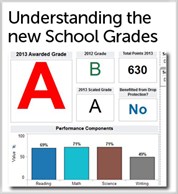 There has been a lot of confusion around the recently released 2013 school grades for elementary and middle schools. As Florida prepares for a transition to Common Core standards, and an accompanying host of more difficult tests, the state has made a number of adjustments to the way students and schools are evaluated over the past few years.

We've pulled together all the data for every elementary and middle school in the state to make it easier for you to see what your school's grade is, whether or not it was adjusted due to the "safety net" rule and, if so, what it would have been without the safety net.

>> Go straight to the data.

Go directly to the data to explore the percentage of students passing the EOCs in each subject area for the state, Duval County, and the six other largest counties in the state. 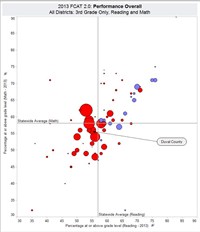 Check out a new data visualization showing how Duval County third graders performed relative to other districts across the state. It also shows the results of how each school within Duval County performed.

Supporting the whole child means focusing not only on students' academic outcomes but also on their overall health, socio-emotional development, and needs and interests as human beings.

To learn more about the current state of health and socio-emotional development among Duval County students we looked at the results from the Youth Risk Behavior Survey of middle and high school students. The survey asks about issues such as violence, safety, sex, nutrition and suicide.