The most comprehensive report on activities of the Jacksonville Public Education Fund.

Each year starting in 2011, the Jacksonville Public Education Fund will publish an annual report documenting all of its activities over the prior fiscal year. This is the best way to learn about what we do and how we do it. 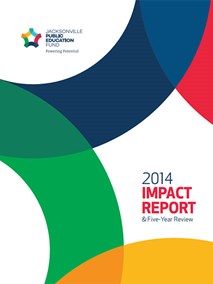 Our Impact Report and Five-Year Review captures how our high-performing, high-capacity organization continues to move public education forward with the partnership and collaboration of important stakeholders. 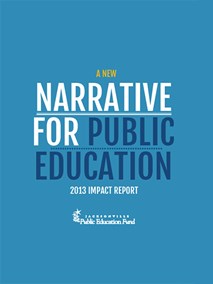 Our annual report takes an in-depth look at our work as seen through the lens of the four key levers that we believe are the keys to positive, long-term change for our city's public schools. 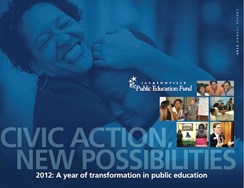 In Fiscal 2012, the Jacksonville Public Education Fund celebrated a number of exciting milestones. Goals set for the ONE by ONE community mobilization campaign were surpassed, and when it came time for a leadership transition in the public school system, citizens of Duval County stood rallied and ready to take public education in this city to a new level. 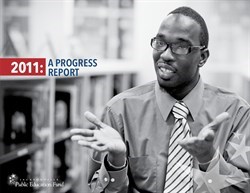 In Fiscal 2011, the Jacksonville Public Education published its first annual report of activities, including the launch of major initiatives in data and policy research, community mobilization and advocacy.

See the below to learn more about the organization as it began to reach full capacity two years after organizing in 2009.

The Jacksonville Public Education Fund values transparency and as such acknowledges its responsibility to keep the community informed of all aspects of the organization. Below are our audited financial statements and 990 forms.

We are proud to be a Charity Navigator 4-Star Charity. Learn more.