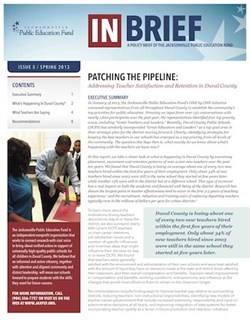 In January of 2013, the Jacksonville Public Education Fund's ONE by ONE initiative convened representatives from all throughout Duval County to establish the community's top priorities for public education. Drawing on input from over 150 conversations with nearly 1,600 participants over the past year, the representatives identified four top priority areas, including "Great Teachers and Leaders."

Recently, Duval County Public Schools (DCPS) has similarly incorporated "Great Educators and Leaders" as a top goal area in their strategic plan for the district moving forward.   Clearly, identifying strategies for keeping the best teachers in our schools has emerged as a top priority from all levels of the community.  The question this begs then is, what exactly do we know about what's happening with the teachers we have now?

In this report, we take a closer look at what is happening in Duval County by examining placement, movement and retention patterns of over 2,000 new teachers over the past ten years.  We found that Duval County is losing on average about one of every two new teachers hired within the first five years of their employment.  Only about 34 percent of new teachers hired since 2003 were still in the same school they started at five years later, while another 15 percent were still in the district but at a different school.  This type of turnover has a real impact on both the academic and financial well-being of the district.  Research has shown the largest gains in teacher effectiveness tend to occur in the first 3-5 years of teaching experience and the recruitment, induction and training costs of replacing departing teachers typically runs in the millions of dollars per year for urban districts.

To learn more about the motivations driving teachers' decisions to stay in or leave the district, we also surveyed nearly 600 current DCPS teachers on their career intentions, job satisfaction levels and a number of specific influences and incentive ideas that might influence their decision to stay in or leave DCPS.  We found that teachers were generally satisfied with the environment and administration of their own schools and were least satisfied with the amount of input they have on decisions made at the state and district levels affecting their classroom, and their overall compensation and benefits.  Teachers rated improvements in compensation and benefits, working conditions, and autonomy and influence as the changes that would most influence them to remain in the classroom longer.

Click here to see an interactive graphic that includes the diverse voices of Duval County teachers talking about their experience in the classroom.