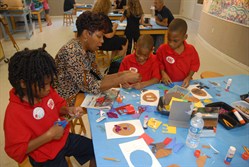 Today, the School Board spent nearly four hours in their second workshop about the 2013-14 district budget, and many major changes started to become clearer. Details of a proposed central office reorganization, a new staff allocation plan and changes to student and teacher school days all prompted great discussion, and seem to be closely aligned with the vision Superintendent Nikolai Vitti has promoted since he took office in November.

Under a proposed central office reorganization that will take effect this summer, the district plans to reduce the number of central office administrators by 36, from 262 to 226, saving more than $5.4 million. Most of those savings come from the consolidation and redesignation of "clusters" into four "areas," with schools organized by feeder pattern. See the new areas here (PDF).

Vitti proposed sending the central office savings to schools, and funding a new way of distributing teachers and other staff to schools throughout the district. Called a "staff allocation plan," the effort seeks to create more equity among schools.

Under the plan, all elementary and middle schools will receive at least one music, art and physical education teacher, fulfilling a promise Vitti made in a number of public forums after he was first hired and a great demonstration of the ONE by ONE whole child priority. All schools - elementary, middle and high - will also receive a media specialist to support 21st century learning and at least one security guard to ensure student safety.

The equity in this model is clear, however it does raise some concerns about very small schools, which would not be able to distribute the costs for the new positions across as many students. It will take some time to see those impacts, and for the School Board and community members to pass judgement on the trade-off.

See a draft of the staff allocation formulas here (PDF).

The new budget also calls for an additional 30 minutes of daily instruction in middle and high schools, restoring an eight-period day, with an A/B block schedule. Middle schools will now run from 9:30 a.m. to 4:15 p.m. and High Schools will run from 7:15 a.m. to 2:00 p.m.

The Superintendent and Board discussed in the future years looking at switching those days, such that middle schoolers would attend school beginning at 7:15 a.m. and high schoolers at 9:30, based on research about the teenage learning styles.

With the additional time in the school day, the district has reached an agreement with Duval Teachers United to create a 90-minute block of collaborative planning time each week, a key recommendation of a study by Education Resource Strategies, partially funded by the Jacksonville Public Education Fund. That time would be used for both grade-level and curriculum-area meeting, allowing teachers to work together to create common lessons and assessments.

Additionally, master schedules would be reviewed multiple times prior to the start of the school year to ensure that teachers are not teaching more than two "preps," meaning that a math teacher may teach Algebra I and Algebra I Honors, but not Algebra I, Algebra I Honors and Geometry, allowing the teacher to dedicate more time to developing effective lessons.


The board's next budget workshop will deal with district-level department budgets and initiatives It will be held on May 9 at 9 a.m. in the district's sixth-floor conference room.