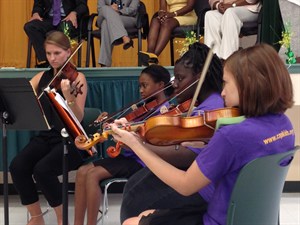 At Central Riverside Elementary this morning, the Kennedy Center for the Performing Arts announced that it had selected Jacksonville as its newest partner city for its Ensuring the Arts for Any Given Child effort, the 14th such city nationwide. Through the program, the Jacksonville community will inventory existing arts resources and develop a long-term art education plan for public school students.

The announcement is the most recent positive movement towards the "Educate the Whole Child" goal in the ONE by ONE Community Agreement and in the Duval County Public Schools Strategic Plan. The Cathedral Arts Project led Jacksonville's application to the Kennedy Center, and has set up a community committee that will oversee and implement the work. The Jacksonville Public Education Fund will sit on that committee and hopes to be able to integrate the data from the survey of existing arts resources into our School Facts Jax site.

Other cities that have participated in the Any Given Child initiative include Sacramento, CA; Sarasota, FL; and Las Vegas, NV. To see reports about how these cities have committed to supporting arts education, visit the Kennedy Center web site.