When 2012 school grades were released last month, there was certainly much for Duval County to be encouraged by.  86% of Duval County schools were either "A", "B", or "C" schools - including all Duval County high schools.  110 schools in Duval County either improved or maintained their grade from 2011, including some of the district's lowest performing schools in 2011 making dramatic improvements.

In order to continue improving, we need to be able to look closer at this data and find out which schools still need more attention and which may be able to serve as models to try to replicate.  The graphic below looks at each graded school in the district by the total number of school grade points earned, in context with a number of other factors. 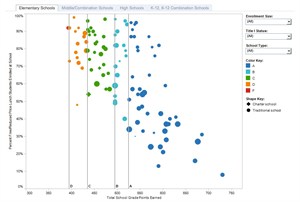 Click here to see the interactive chart and read more about performance among schools with different demographic factors.

So what can this tell us?  For one thing, we can look at the schools closest to the upper-right corner of the graph to find which out which schools serving the highest percentages of FRL students are also performing at the highest levels academically.

For example, in looking at the first tab, we see that there are 12 "A" elementary schools serving populations of 75% FRL students or more.  What are schools like Biltmore, Carter G. Woodson, Spring Park, Englewood, and the others doing differently that could be replicated at other schools serving high-risk populations?

As you look through the charts below, what else can we learn about what's working (or what we need to look even closer at) to continue improving performance throughout the district in 2013?