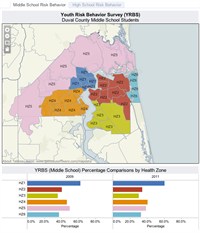 One of the top priority areas to emerge in both the ONE by ONE community agreement and Duval County Public Schools' (DCPS) new strategic plan is a focus on supporting the whole child.  Supporting the whole child means focusing not only on students' academic outcomes but also on their overall health, socio-emotional development, and needs and interests as human beings.

To learn more about the current state of health and socio-emotional development among DCPS students we looked at the 2009 and 2011 results from the Youth Risk Behavior Survey (YRBS), developed by the Centers for Disease Control and Prevention (CDC) and voluntarily taken by DCPS middle and high schoolers.  The survey asks about six types of health-risk behaviors that are affecting youth in the United States: violence, safety, sex, nutrition and weight management, suicide, among other topics.

Some of the news is very encouraging.  Overall trends at both the middle and high school levels seem to be decreasing their engagement in risk behaviors related to alcohol consumption and violence over the past few years.

Specifically, in the area of "Alcohol, tobacco and other drug behaviors" among middle school students, five of seven specific behaviors had statistically significantly decreases in areas of cigarette, alcohol and marijuana use between 2009 and 2011.

In the area of "Violence, suicide, and safety", among middle school students specific indicators regarding auto and bike safety, carrying weapons, fighting, and attempting suicide all improved.

However, there are also some alarming risk areas that need to be addressed.  Most notably, behaviors related to suicide attempts increased significantly among high school students from 2009 to the 2011.

When we look beyond overall trends, we also see differences across different areas of Duval County that need to be strategically targeted for improvement, including:

This information provides a great starting point for thinking about how to strategically address the health and socio-emotional development needs children all throughout the district.  The graphic below displays information about many of the key risk behaviors among students districtwide, but there is a wealth of more detailed information also available in the  YRBS reports on the DCPS website.

As you explore the data above, what other trends or differences across town emerge that we should be paying attention to in order to best strategically distribute support efforts to all students who need it?