Last week, Mayor Brown, and officials from the Jacksonville Children's Commission, Wallace Foundation  and National League of Cities gathered afterschool stakeholders to celebrate significant strides being made locally and across the country in building strong afterschool systems. This is great news since quality afterschool programs have been shown to increase school attendance, raise graduation rates and reduce smoking, drinking, drug usage and teen parenting among young people. 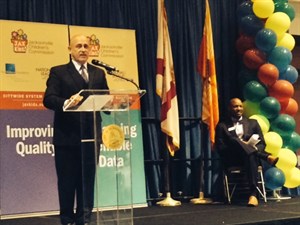 In Jacksonville, afterschool programs have been a city priority since the Jacksonville Children's Commission launched Team Up in the late 1990s. Thanks to sustained city and school district funding, there are now 44 Team Ups in Duval County Public Schools, and another 20 at community-based sites. In total, they serve over 12,000 elementary and middle school students and have been successful in increasing school attendance and on-time grade promotion. The Wallace Foundation is currently providing a four-year grant to the Commission to enhance data reliability and program quality and expand participation. So far, the Commission has held a professional development conference for youth workers, conducted a survey of academic and youth outcomes, created an online program locator tool for the community, and conducted an Efforts To Outcomes (ETO™) pilot with non-profit providers. Next steps include creating clear quality standards, improving data reliability and sharing and increasing the number of students participating.
At the celebration event, Priscilla Little of the Wallace Foundation commended Mayor Brown for his leadership in continuing to prioritize afterschool and shared six essential building blocks of successful city efforts around the country. They are:
Jacksonville looks to be well on its way in becoming a model for a high quality, sustainable afterschool system.
---