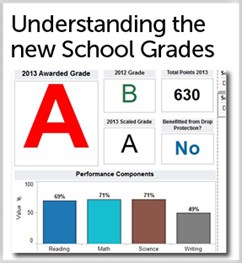 The Florida Department of Education recently released 2013 school grades for elementary and middle schools throughout the state, but not without some confusion.  As Florida prepares for a transition to Common Core standards, and an accompanying host of more difficult tests, the state has made a number of adjustments to the way students and schools are evaluated over the past few years in an attempt to prepare everyone for the higher Common Core standards to come.

However many schools and districts believed that some of the changes were made without enough time to adjust to.  As a result, the  state convened a task force to review these issues in early July and the commissioner recommended extending a provision that limited school grades to dropping no more than one letter grade from last year, regardless of final school grade score calculations.  This rule has been often referred to as the "safety net".

The reasoning for this "safety net" was that while it is important to continue raising or maintaining high standards in preparation for the demands of Common Core, it is also fair to acknowledge that schools had less than a full year to adjust to some of the changes and that the consequences of becoming an F school are severe and may not be appropriate for schools making progress in the right direction, just not quite as fast as some of the standards changed.

Nevertheless, the recommendation caused much confusion about what this year's school grades actually mean and how parents could know if the grade their school received this year is the one they would have earned without the "safety net".  Many parents also have said they want to have access to all the raw data that goes into the school grade scores to make decisions for themselves about how a school is performing.

In the first tab of the visualization below, we've pulled together all the data for every elementary and middle school in the state to make it easier for you to see what your school's grade is, whether or not it was adjusted due to the "safety net" rule and, if so, what it would have been without the safety net.  Beneath that, you will also find all of the performance levels that go into calculating a school's grade visualized for you to review.

Hover over each piece of information in the graph  for more explanation about what it means.

In the second and third tabs, you can also see every elementary or middle school in a district plotted by percent free/reduced price lunch eligible students and total school grade points earned in 2013.  Schools the benefited from the "safety net" rule are highlighted in red on these tabs.

Please note: To use the second two tabs, you will need to select the district you are interested in and "(ALL)" under the "Select School" option in the first tab to see those schools in the other tabs.

Also please note that these visualizations are optimized for larger monitors, some images may appear condensed on small monitors.