Update 7/23/12: The Florida Department of Education has published revisions to the 2012 School Grades for elementary and middle schools. Find more information here.

The Florida Department of Education released the first round of highly anticipated 2011-2012 school grades today, including elementary, middle and combination schools (high school grades will be released later in the fall).  Despite some major concerns about the impact of new standards, the majority of schools in Duval County performed as well or better than last year.

The graph below shows 2011 and 2012 school grade totals for those schools released today (2012 totals in bold).  Compared to last year, Duval County performed similarly at most levels, with the largest change coming in the increase of "D" schools (8 more than last year), though Duval County was the only district in the state to both increase its number of "A" schools and decrease its number of "F" schools. 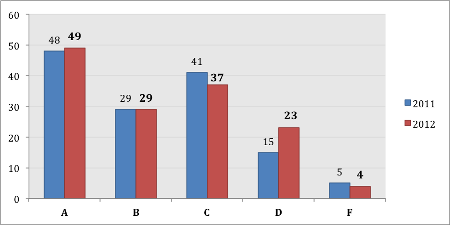 It is important to remember that last year's school grades and this year's are not a direct "apples-to-apples" comparison because of a number of changes made to the formula used to calculate them during the past year (including new standards applied to FCAT 2.0 performance, and the inclusion of more English-language learner and special education students' test scores in performance calculations this year). Duval County Public Schools also has six schools-five charters as well as Waterleaf Elementary-that received grades for the first time. Four of them received grades of "A".
Additionally, in an effort to mitigate the potential impact of these changes during a transition year when schools did not have a full academic year to plan for them, the State Board of Education placed a "lower limit"-a cap-on this year's grades, limiting declines to no more than a 1-letter grade drop at any school.

At the individual school level, 32 schools in Duval County improved one or more letter grade, 53 schools stay the same, and another 53 schools dropped one letter grade from last year.
The largest gainers were Cedar Hills Elementary School ("D" to an "A") and Highlands Elementary School ("F" to a "B"), each rising three letter grades in a year of increased standards. Many of Duval County's schools with high-levels of low-income students also increased or maintained their grades despite higher standards, including Carter G. Woodson Elementary, which increased from a "C" to an "A" with 95 percent of its student body receiving free- or reduced-price lunch.

For schools that declined, the "lower limit" preventing grades from dropping more than one-letter this year means that all schools declining this year officially declined by the same amount - one grade.
In looking at actual point totals earned and the grades that would have been assigned to schools without the limit in place, Duval County had 17 schools (16 elementary schools and 1 middle schools) that would have dropped by more than one letter grade without the limit.