Duval County residents support a broad range of current and potential initiatives to improve public education, according to a new poll released today by the Jacksonville Public Education Fund.

Nearly two-thirds of respondents said they supported the use of Common Core State Standards in Florida - the same proportion who said they supported the standards without specifically using the name Common Core. But the poll, administered in November to a representative sample of Duval County residents, also found that the majority of them feel uninformed about the new test that will measure the new standards, and about the changes to the school grading system. 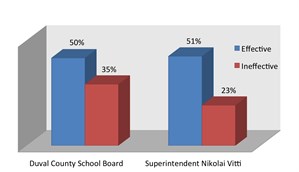 The poll also found continuing strong support for Superintendent Nikolai Vitti and the Duval County School Board, with half or more of respondents rating them as effective, and a third or fewer rating them as ineffective.

This interactive visualization lets you look in depth at each question - including crosstabs.

"This is a significant year of transition in public education," said Trey Csar, President of the Jacksonville Public Education Fund. "It's encouraging to see so much support for the standards and for the Duval County Public Schools leadership team. But there's a lot of work left to do, especially when it comes to making sure parents and citizens are informed about the changes." 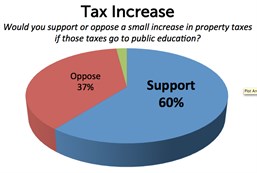 Respondents were also asked about the four priorities found in the district's Strategic Plan, which has integrated the majority of the priorities identified by community members in the ONE by ONE Community Agreement created in January 2013. When asked where the district has made the most improvement, respondents most frequently identified "Engage parents, families and the community in schools," followed closely by "Focus on providing a well-rounded education that includes art, music, physical education and health services."

The poll is the second in what will be an annual research effort by the Jacksonville Public Education Fund. The survey was conducted November 10-16 by the Public Opinion Research Laboratory at the University of North Florida of 641 (514 complete) residents of Duval County.

>> See the data in an interactive format with crosstabs and demographics

See the presentation slides from the press conference below: