Today the Florida Department of Education released 2014-2015 school grades, nearly a year after the tests they are based on were administered.

Because of the transition last school year to the Florida Standards (which outline what students need to know and be able to do in English language arts and math), these baseline school grades are based on the first administration of the new Florida Standards Assessment.

These grades should not be compared to past or future grades for one very important reason: They are missing the growth component that usually makes up as much as half of a school grade.

To explain a bit more, school grades in Florida are mainly based on two components, proficiency and growth.

Here’s the problem: Because you can’t compare the new Florida Standards to the old Sunshine State Standards, there is no growth component in the 2015 grades.

So even though the distribution of A schools, B schools and so on won’t look very different than in 2014, it’s important to understand that these grades really cannot tell us how well a school is performing.

The other thing to keep in mind is that the State Board of Education has also set new thresholds for the school grades and new cut scores to determine what constitutes a passing score on the Florida Standards Assessment. You can read more about that here.

The best bet? Wait a few months for the 2015-2016 school grades to come out, likely in June or July. Those will be based on the second administration of the Florida Standards Assessment this spring, and will tell us how well students are improving between last year and this year.

We have updated our Learning Center site and school pages to reflect that these grades should not be compared to previous years, so that there’s no confusion on the part of people who are searching for school information this spring.

You can find individual school results at jaxpef.org/learn.

Here's a snapshot of Duval County Public Schools grades for 2014-2015: 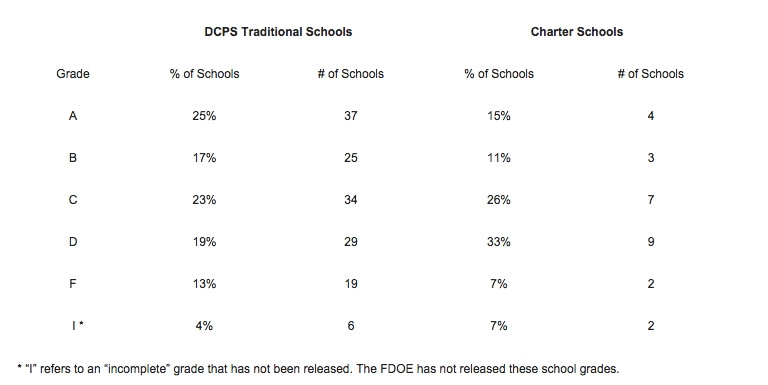 Check out the district's press release to get a full recap on the newly released school grades.