ESEA, NCLB, ESSA, and YOU

ESEA, NCLB, ESSA, and YOU: What do they stand for, what do you stand for?

New education policy is coming to Florida and YOU should have a say in how it impacts our schools! The Florida Department of Education (FDOE) is beginning the process of determining how the  Every Student Succeeds Act (ESSA), which will replace the No Child Left Behind Act (NCLB), should take form in Florida policy. The FDOE is holding an online public input session on Monday, June 20 where you will have the opportunity to make your voice heard and contribute to decisions about Florida’s education system! Read on to get informed about the laws, the public input sessions, and the changes you might suggest. This is a great chance to make a real difference in our state’s education.

Florida, like other states around the country, is taking the first steps in implementing the newest iteration of the Elementary and Secondary Education Act (ESEA), which is called the Every Student Succeeds Act (ESSA). The ESEA was signed into law by Lyndon B. Johnson in 1965 and has been reauthorized continuously since its inception with various changes at each renewal. Intended to give all students, regardless of income, the opportunity to succeed through education, the ESEA has remained the same throughout the past 50 years. ESEA policies, such as Title I funding for low-income students, are now well-known methods of promoting education among economically disadvantaged students.

ESSA reforms No Child Left Behind

The ESEA was previously known as the No Child Left Behind Act (NCLB), which was signed into law in 2001. Now it is the newly minted Every Student Succeeds Act (ESSA), which was signed into law in December 2015. The ESSA makes some changes to address perceived issues with the NCLB, which was relatively unpopular across partisan lines. The NCLB focused strongly on accountability, which was effective in highlighting areas that needed improvement (i.e. achievement gaps) and creating nationally regulated education standards. Despite these benefits, the NCLB was inflexible in its administration of one-size-fits-all reforms across states and districts with vastly different circumstances. Additionally, the NCLB included what many perceive as unnecessarily high amounts of standardized testing, which detracted from in-class teaching time and arguably reduced assessment of student academic performance to a single measurement.

One of the improvements the bipartisan writers of the ESSA hope to make with the new law is to help states and districts take a more holistic approach to school and student evaluation, but that will be up to each state’s legislature and education department.

The ESSA’s major changes from the NCLB include the following:

By reducing the burden of testing and increasing the amount of flexibility that individual states have to customize their education policies, those who best understand the context of their students’ educational environments are more empowered to advance opportunity in low-income and low-performance schools.

How you can weigh in on the changes...

With the new federal rules and some increased freedom of choice coming down the pipeline from the U.S. Education Department over the next year, change may be on the horizon. The Florida Department of Education (FDOE) has begun deciding how to implement ESSA policy. As part of this process, the FLDOE will be holding forums for public input as to what should be included in Florida’s state education plan based on the new ESSA requirements. This means that Florida’s public could have a key part in the decision-making process for state education that may last for several decades. The first of these public input sessions will be held online on June 20, 2016, with the final session being held July 22, 2016.

A quality public education is an American right, and it is imperative that we use this chance to ensure that Florida’s students have this key to opportunity and passport to success. This is an unprecedented and exciting opportunity for each and every Floridian to get informed and make a difference in our state’s education!

For a simplified version of the FLDOE’s timeline for ESSA implementation click here, and to learn more about the FLDOE’s specific goals for its public input sessions click here. For technical questions about the ESSA click here.

See below for the FLDOE flier: 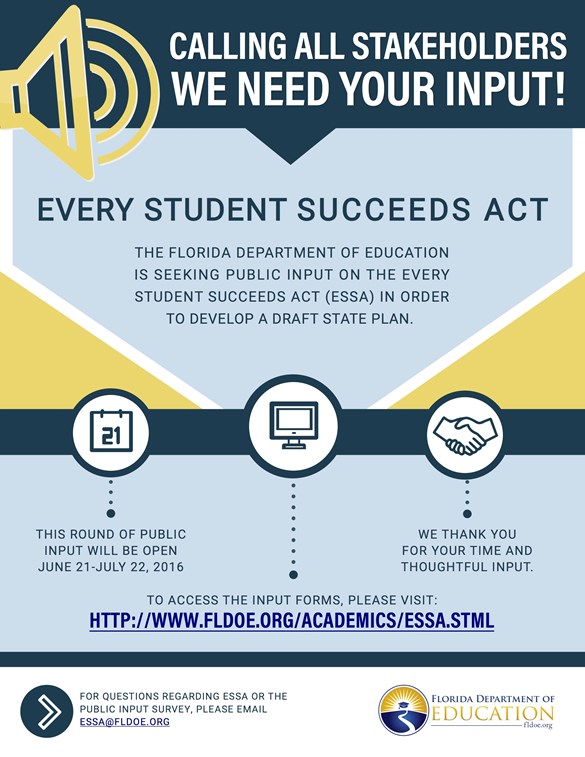