Demystifying School Funding: Where it comes from, how it's spent and what we can do to improve. 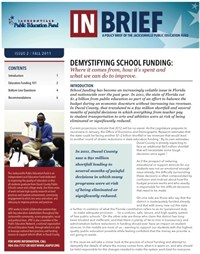 In this brief, the Jacksonville Public Education Fund explores three key questions:
- Does the district have enough money?
- Is the state doing its part to adequately fund schools?
- Is the district doing its part to spend the money it has responsibly?
In eight pages of clear explanation and graphics, learn more about how our schools are funded and what action steps our community, school district and state Legislature can take.
Download the report now (PDF).
Since 2008, significant reductions in state spending have caused serious cuts to public education in Duval County. School funding is a volatile and emotional issue, and it is complicated. In this brief, the Jacksonville Public Education Fund brings forward the facts: Duval County Public Schools does not have enough money to adequately implement state and federal mandates on top of the state constitution's requirement to provide a "uniform, safe, secure, and high quality system of free public schools" for all students.
>> Download the full brief now.

School funding is determined by a complex series of federal, state and local funding formulas that are often not well-understood. Once the district receives the money, there are still numerous state or federal restrictions placed on how some of that money can be spent. In 2011-2012, Duval County Public Schools has local authority over only about 61% of its budget, known as the general fund. The other 39% is restricted by law to be spent on state or federally mandated programs.

On top of the 39% of the budget already set aside for state or federal mandates, the district will be required to spend more than $50 million this year out of its general fund to implement a number of unfunded state mandates (such as class size limits, expansion of standardized testing, and school-choice scholarships). The district does not have enough money to adequately implement all these mandates on top of their requirement to provide a "uniform, safe, secure, and high quality system of free public schools" for all students as required by the state constitution. Between the ongoing cuts and the additional burden of unfunded mandates, the state is not doing its part to adequately fund education at a level that matches its expectations.
On the local side, a recent independent audit by the nonprofit Education Resource Strategies (ERS) found that Duval County Public Schools spends its budget as efficiently as any other district in the nation that ERS has studied in terms of minimizing overhead and getting money to schools. In their final conclusion, ERS found that the district is spending its money responsibly, but there is some room for improvement in spending it more effectively.

Like the bibliography? Just want to learn more? Check out the links below for a comprehensive list of studies, articles, organizations and information about school funding in Duval County, Florida and the United States.

DCPS 2012-2013 Legislative Agenda and Recommendations (with information on unfunded mandates):


For more information about property taxes, revenue estimates and other projections: