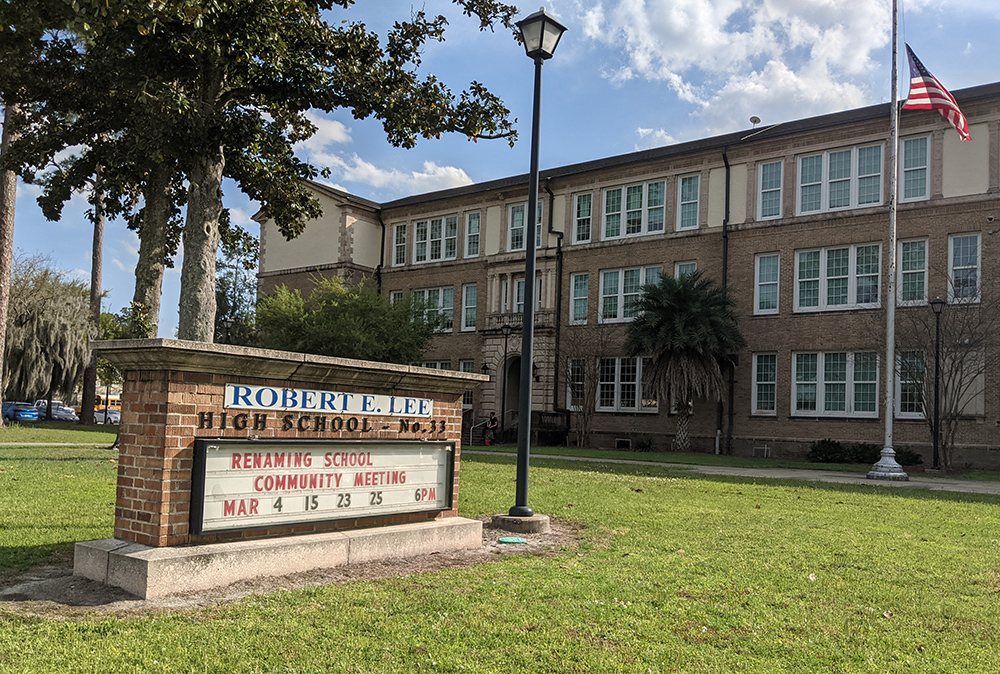 Which schools are currently under consideration for new names?

Why is the School Board considering new names for these nine schools?

Duval County Public School’s mission is “to provide educational excellence in every school, in every classroom, for every student, every day.” One of its core values is Equity: “We promote an environment that ensures equal opportunity, honors differences, and values diversity.”

In summer 2020, following massive nationwide and local protests over the killing of George Floyd, community members in Jacksonville renewed their calls to remove Confederate names and statues from public places.

On June 9, Mayor Lenny Curry ordered Confederate statues removed from prominent public parks in Jacksonville under the cover of night. Later, the City Council voted 16-2 to rename Hemming Park, which was named for a Confederate soldier, to James Weldon Johnson Park, in honor of Jacksonville’s most famous son and civil rights activist.

Following the mayor’s action, the School Board initiated the process of considering new names for schools in June 2020, when then Board Chair Warren Jones submitted a written request to begin the process to change the names of six public schools named after Confederates. “We have come to a place and time in the history of our city, that we must begin the process of renaming all the schools named for a confederate soldier,” Mr. Jones wrote. “This effort can help to heal a city that is fractured. In following the lead of our mayor, who is boldly removing confederate monuments, it is high time that we do the same.”

The Board voted unanimously, 7-0, to start the process based on the request.

In July 2020, then School Board member Ashley Smith-Juarez submitted a written request to begin the process to change the names of three additional schools named for people who marginalized indigenous people. The Board voted 6-1 to start this process as well, with Board Vice Chair Darryl Willie opposing the move.

After that vote, two board members left the board due to term limits, and two new members were elected: Board Member Kelly Coker and Board Member Cindy Pearson.

The process for renaming schools is governed by School Board policy, so the board is following that process now. You can read that policy here.

Why were schools named after Confederates in the first place?

Many schools were given Confederate-themed names in the 1950s and 1960s as Southern states mounted what they termed "Massive Resistance" - a coordinated effort by governors, Legislators, and other white leaders to resist the racial integration of public schools, according to the Equal Justice Initiative.

In Duval County, some schools were named after Confederates even earlier, during the era of Jim Crow, racial terror lynchings, and redlining and segregation of neighborhoods. Research from Education Week shows that five of the six Duval schools named after Confederates were named during the period of Jim Crow, school segregation or during the tumultuous period of integration where white communities resisted integrating schools. The Supreme Court decided Brown v. Board of Education in 1954. The Duval County School Board resisted integration, and in 1971, a federal judge ordered the Duval County School Board to fully comply with integration in response to the NAACP’s legal challenges.

What has research shown about this issue?

A significant body of research has shown that school climate and culture affects student learning. According to the Alliance for Education Solutions: “Freiberg and Stein (1999) describe school climate as ‘the heart and soul of the school,’ the feeling that either encourages teachers and students to engage, love the school, and to want to be a part of it, or to reject the school and disengage from it. It is the outcome of the school’s norms and values, the way in which people at the school relate to and interact with one another, and the way systems and policies manifest.”

Other research has shined a light on what Confederate symbols mean to black educators working in those schools. A study by Marshall University interviewed black educators working in Confederate-named schools. “In three focus groups over a two-week period, I interviewed 17 black educators who had worked in schools from Harlem to the hollers of Appalachia, and from Atlanta to San Francisco. For them, schools named to memorialize Confederates are inextricably tied to both historical and revived white supremacy movements across the globe—and they anchor these racist ideals into the daily environments and consciousness of the communities these teachers serve.”

What will it cost and how will it be paid for?

When Nathan Bedford Forrest High School was renamed Westside High School in 2014, the estimated cost was about $185,000, according to DCPS.

Dr. Greene has committed to using no sales surtax dollars to pay for school renaming. According to the Florida Times-Union, “School renaming costs would come from a mix of general funding, private donations, capital funding and internal accounts.” More details from Dr. Greene's presentation are shown below.

The Jacksonville Public Education Fund has opened a School Renaming Fund for community members who wish to contribute private donations to support renaming.

What has the community said?

Many community groups have spoken in support for school renaming, while the opposition has primarily come from alumni who graduated from Lee High School in the 60s, 70s and 80s. Groups in support of renaming include the Chamber of Commerce, NAACP, Northside Coalition, Take ‘Em Down Jax, 904ward and the Florida PTA and the Duval County Council of PTAs.

The business community has not spoken out on this issue so far, but has expressed general support for removing Confederate monuments in recent years. In 2017, following the deadly white supremacist rally in Charlottesville, VA, business groups including the Jacksonville Chamber of Commerce and the Jacksonville Civic Council signaled their support in an article by the Florida Times-Union.

According to a statement from Chairman Ed Burr at that time: “The Jacksonville Civic Council opposes racism and discrimination in every form and seeks to advance a culture of fairness and respect for all. We commend Mayor Lenny Curry and City Council President Brosche for taking the lead to thoughtfully consider removal of Confederate monuments from local public property, particularly in light of the tragic events of last weekend. The Civic Council will evaluate and weigh in on/make specific recommendations regarding any legislation introduced on the matter. Our vision of Jacksonville holds no room for hate.”

“The violence in Charlottesville was disgusting, hateful and does not represent who we are as a country,” said Daniel Davis, president of the Jax Chamber, at that time. “The JAX Chamber has historically taken a stand on civil rights issues in this community and I would expect us to be at the forefront of any discussion on removing Confederate monuments from city property.”

When will the School Board decide on the names?

How can I make my voice heard?