Florida Standards Assessment (FSA) results for English Language Arts (ELA) were released for the 3rd grade yesterday by the Florida Department of Education (FLDOE). This the first time that scores from the FSA, which began as the state’s official performance test in 2015, can be compared from year to year. The FSA, which is designed to test what students should have learned in a given grade level and subject area based on the new Florida Standards, found that Duval 3rd-graders have improved their knowledge of ELA. Performance is measured in terms of the percentage of 3rd-graders who receive passing scores on the ELA assessment, meaning their ELA skills are at or above what is expected for their grade level. This year’s results contained some happy news for many Duval County schools, which may be a good sign as more FSA scores are scheduled to be released over the next month or so.

Although we hope this may be indicative of a larger improvement across other grade levels and subject areas, that remains to be seen until more scores are released. To view how Duval’s 3rd-graders performed compared to the rest of the state in 2016, click here.

There was tremendous variation in scores and score improvements between elementary schools within Duval County. Below are the top five and bottom five school performance results based on overall percent of 3rd-graders passing the FSA:

And below are the top and bottom five schools based on year-to-year performance score changes: 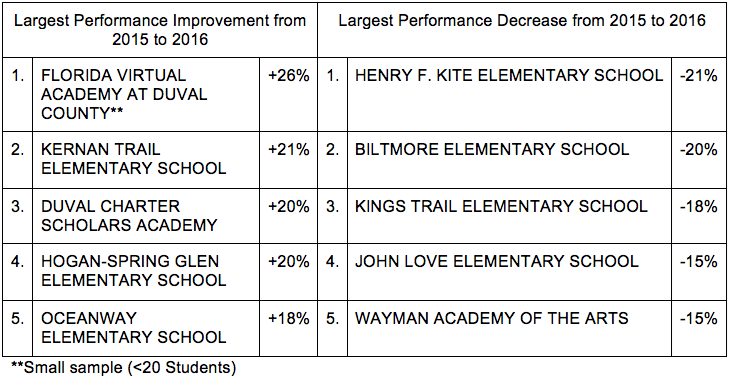