Florida Times-Union features JPEF in its second decade of impact

The article, which highlighted the story of President Rachael Tutwiler Fortune, was on the front page. 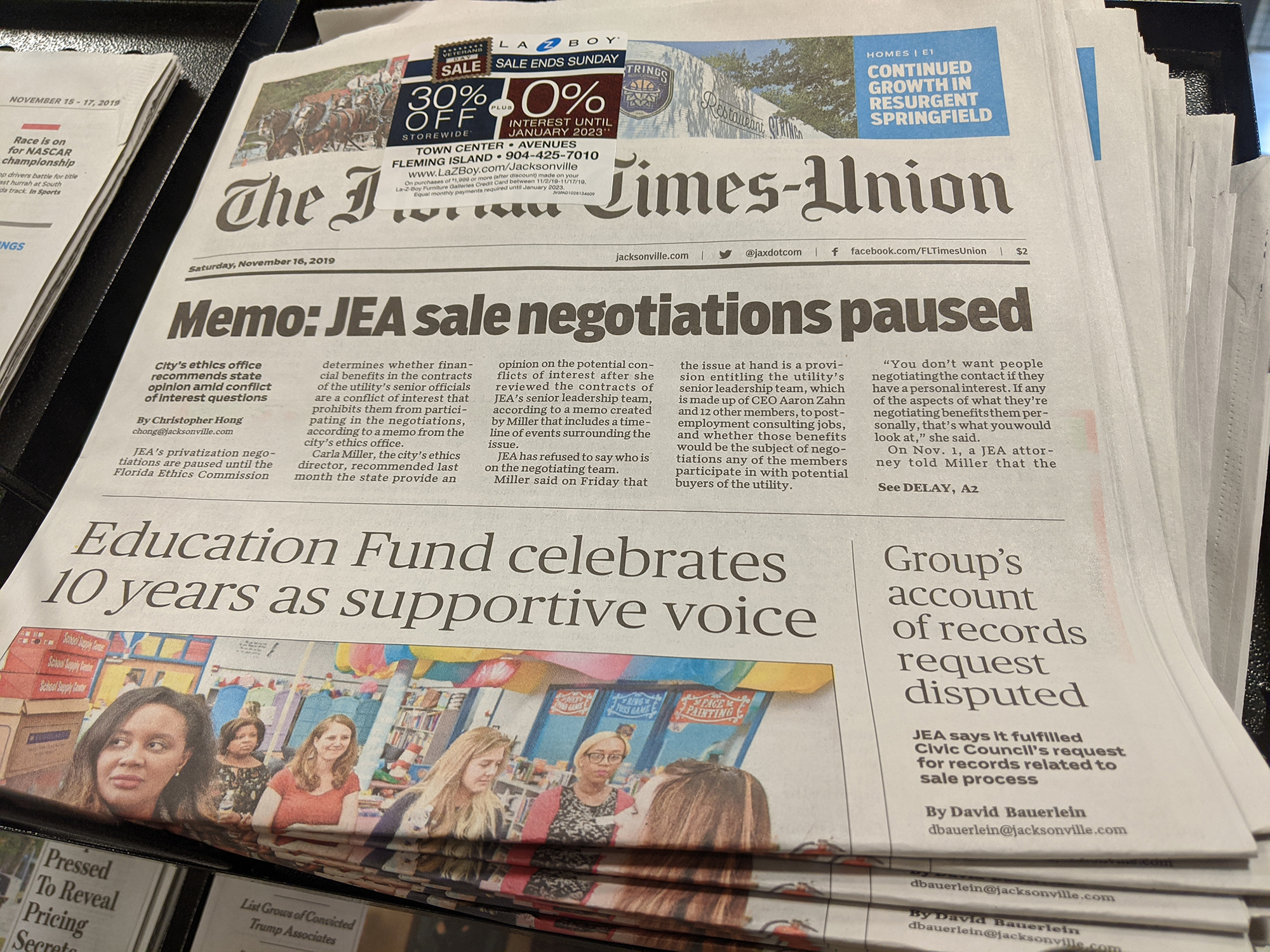 The Jacksonville Public Education Fund was proud to be featured on the front page of the Florida Times-Union as we celebrate a decade of impact. Below is the full text of the story by Beth Reese Cravey, which ran on Saturday, Nov. 16.

Rachael Tutwiler Fortune started with the Jacksonville Public Education Fund in its infancy and is there again to lead the nonprofit into its second decade working to enhance student achievement in Duval County schools.

A mother at 16 who grew up to work in the Obama administration, Fortune has long epitomized what the fund works toward: transforming at-risk youth so they can grow into successful adults.

As the fund celebrates its 10th anniversary, Fortune has been looking back at its legacy, which includes research, forums, parent leadership training, teacher rewards, principal coaching and a not entirely successful initiative to raise $50 million for schools. And she has been planning for the future. She excitedly talks of making “strategic investment in public education,” “leveraging private philanthropy” and producing education reports that do more than sit on a shelf. She talks about maintaining what she regards as the Fund’s major accomplishment so far: making public education a top priority in the community. “I truly feel its part of the mission of my life to do this work,” she said.

In 2009 The Community Foundation for Northeast Florida took on the role of incubator for a fledgling fund designed to support Jacksonville education initiatives. The new, privately funded entity was to be the third generation of an outside funding arm for Duval County public schools, with the goal of improving student achievement. But it would be larger and with a broader vision.

“It became obvious that Jacksonville needed an independent organization ... dedicated to constructive public engagement around the topic of public education,” said foundation president Nina Waters. “A good education is at the top of the list of ways that our citizens can improve their lives.” The goal was — and remains — “to close the opportunity gap for low-income students and students of color by investing in great leadership in our public schools,” according to the fund website.

After 10 years, the fund “has become the go-to resource for parents, community leaders and others to understand how Duval County public schools are performing and how they are or may be impacted by current issues and opportunities,” Waters said.

U.S. District Court Judge Brian Davis was an early board member and is now board chairman.

“An educated and informed citizenry helps ensure a thriving democracy,” he said. “Education is also critical to breaking the shackles of poverty that restrain so much of our community.”

The fund’s role, he said, is to “improve the education outcomes of all of our community’s children, particularly those experiencing an opportunity disadvantage.”

He cited programs such as the annual EDDY teacher of the year awards, the Parents Who Lead training institute and the School Leadership Initiative that provides coaching and other support for principals. They are “lifting our community’s teachers to be recognized as the critical contributors they are, creatively supporting school leaders,” Davis said.

Schools Superintendent Diana Greene said the fund’s board, staff and donors are an “integral part of Team Duval.” “JPEF’s work is one of the reasons Duval County Public Schools is now recognized as one the nation’s highest-performing urban school districts,” she said, and has been “an educational compass for our community.”

“I appreciate the relationship they have fostered with the school district ... built on our shared belief that every student deserves a high quality education,” she said.

She cited the principal development and parent leadership training initiatives as particularly compelling.

“The research is clear that principals play a pivotal role in the culture and climate of their schools,” Greene said. ”‘Parents Who Lead’ ... is empowering our parents to share their voices with us and their communities to improve public education. “All of this contributes to improvement,” Greene said.

Terrie Brady is president of Duval Teachers United, a union of educators, teachers, paraprofessionals and office personnel. She said the Jacksonville Public Education Fund has “done a phenomenal job celebrating teachers” through the EDDY Awards, has helped build communication between the district, school personnel and the School Board by scheduling joint meetings and educated the public and community leaders through its research and polling. “Even though JPEF is not a policy-making body, they help ... do the work,” Brady said.

Cindy Edelman, a former teacher and foundation board member who helped establish the fund and is on its board, said, “People look to us as the independent, apolitical voice on education.”

“We wanted people to recognize it was everyone’s part to improve the system,” she said. “Community convenings, really listening to the community, have been a hallmark of our work.”

The One by One campaign, in particular, “was quite an undertaking — we had community conversations, volunteers in people’s homes and churches, to listen and record everything they had to say,” Edelman said. “And then our reform-minded superintendent [then Nikolai Vitti] adopted three of our four recommendations that the community determined. That was a golden moment.”

There have also been results in the classroom. The local high school graduation rate, for instance, has grown from 55 percent when the fund was founded to about 85 percent.

Trey Csar, the fund’s first CEO, said One by One provided impetus. “For most of the last decade, JPEF worked to elevate the voice of the community in the discussion about public education and to help that community take responsibility for working with the school system to improve outcomes for kids,” he said. “Holding nearly 170 One by One community conversations focused the community’s energy on a few key areas and we’ve seen measurable progress in the quality of our schools.”

The graduation rate was one of those focus areas, he said, and its rise “means that thousands of students are graduating today with a diploma that were not a decade ago.”

Not every fund push has been a complete success. The fund administered the Quality Education for All Fund, which was a three-year $38M effort funded by local donors to improve teaching and leadership in 36 historically challenged public schools. The Fund is the culmination of the Quality Education for All initiative, launched in 2004 by the Foundation to improve student performance. Many of the schools’ improved their academic performance and retained quality teachers, but struggled to recruit new teachers. Also, the campaign did not meet its $50 million goal, with some donors reluctant to give after Vitti’s departure.

Fortune, who grew up in Jacksonville, knew being a teen mother “for many equates to the end of dreams,” she said.

But her son inspired her “to become my best self and to make my community a better place,” she said. “My heroes were the teachers, church community and family members who affirmed me and my purpose.”

Her subsequent career in education included teaching in Duval County classrooms, working for the fund and for the Barack Obama administration in Washington, and in 2017 led her back to Jacksonville as the fund’s executive vice president. She was promoted to president last year when Csar departed.

During her first stint at the fund, she designed the One to One initiative, which “helped introduce JPEF to the the community, put ‘public’ back in public education.”

As president she wants more neighborhood and youth interaction, more “mutual trust” between parents and teachers and more leadership opportunities for teachers. She wants to develop more methods for school staff to “feel valued.”

“There has been so much tremendous progress in public schools,” she said. “I am excited to see the high graduation rate ... That single indication of progress. So much great work has happened.”

Edelman said she is confident Fortune “is the right leadership” for the future. “I think it speaks so much to her character that she wanted to come back, to embrace the community that she grew up in and provide it with the kind of leadership it’s going to take to move the needle,” she said. “We’re in a renaissance ... The future is very bright.”

Continuing to have “open, honest” conversation with the public — all of the public — will be key, Waters said.

“Public education can be a divisive topic,” she said. “The biggest misconception I see is when citizens think that if they don’t have a child in the public schools, then the topic of public education is irrelevant. In fact, every single citizen has a stake in public education excellence.”