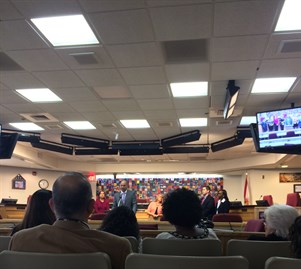 Today was a big day for Duval County Public Schools: The school board voted to approve an agreement with Duval Teachers United for a new three-year contract that is being called groundbreaking on both sides.

The contract creates two salary schedules, with one based on student achievement and one based on a traditional seniority system. It was ratified earlier this month by DTU and voted on today by the Duval County School Board, and makes Duval County Public Schools among the first districts in the state to be in full compliance with new state requirements regarding teacher pay (often referred to as Senate Bill 736).

One of the most significant features of the agreement is that it raises the salary for first-year teachers to $39,000, making it the highest in Northeast Florida. (See the findings about this in our policy brief on the teacher pipeline here.)

At a press conference this morning, Superintendent Nikolai Vitti said that puts Duval County's starting teacher salary at the top of Northeast Florida districts, and moves it from last among Florida's "Big 7" urban districts to the middle of the pack.

Vitti called the agreement historic, and the salary increases "unheard of in today's economy." And he said it is already having an impact as district recruiters are out looking to lure top talent to Duval County.

The contract will establish two salary schedules as required by the state law. The traditional "Grandfather Schedule" will continue to pay teachers according to the usual step system that is based on seniority. The "Performance Schedule," which will be implemented starting next year, would provide increases based on student achievement and allow teachers to earn higher increases faster. The state's performance pay law requires newer teachers or those hired after July 1, 2009 to transfer to the Performance Schedule. All other teachers will be able to choose.

This year, all teachers will be on the Grandfather Schedule and receive a salary increase that is two to three times greater than the previous schedule.

"With this ratification, we are changing the culture and the way we do work," she said. "Teachers are still tired and frustrated with overtesting. But the elements of this contract should give them some relief."

Common planning time among teachers at the elementary level and a Paperwork Reduction Memorandum of Understanding are features of the agreement.

Vitti, Brady and school board members pointed to the years of hard work and significant collaboration between DCPS and DTU staff as the reason why this agreement was reached.

We think so, too.

"This historic agreement is a milestone in the history of public education in Duval County and follows many months of intensive work by Duval Teachers United and district staff," said Trey Csar, president of the Jacksonville Public Education Fund. "The increase in starting teacher pay to be competitive for teaching talent in Northeast Florida, the addition of common planning time in elementary schools, and the focus on incentivizing teachers to work in some of our district's most challenged schools are key to Duval County's ongoing education transformation. Too often, teachers' unions are painted as obstacles to improving public education, but this agreement is evidence of a strong partnership between DTU and the school district toward ensuring all students have access to a high quality public education."

You can find the salary schedule and other documents related to the agreement here: http://www.dtujax.com/Teacher_Settlement_Feb_2015.htm

Teachers, what do you think of this agreement? Tell us in the comments below!