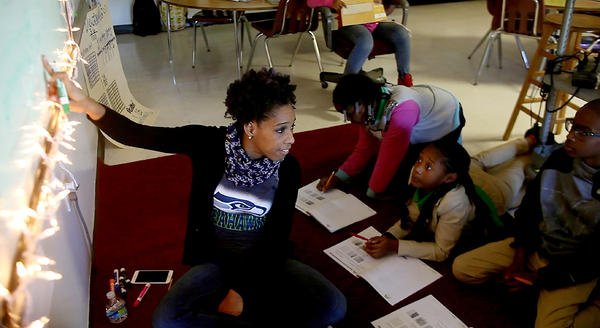 ***Some names and identifying details have been changed to protect the privacy of the individuals referenced.***

Hello, my name is Latrece Brown-Sudduth and I am the 2017 Florida Blue Duval County Teacher of the Year.

Every teacher knows that although you have taught students who presented behavior challenges, there is always that ONE student that you will NEVER forget because he or she gave you the ABSOLUTE hardest time of your teaching career. For me, that student was Smith.

Before the school year started, I was told that Smith was a fighter, did not do any classwork and was very disrespectful to teachers and classmates. I also learned that Smith was considered to be an ESE (Exceptional Student Education) student, however, to me, ESE was no reason to engage him any differently than I would any other student in my class. I mean isn’t that the point of inclusion?

Shortly after the first week of school, I observed these warnings become reality. When I taught, Smith sat quietly but would refuse to answer any questions that I asked throughout the lesson. When given work, Smith sat quietly, but would not complete any of his assignments. When expected to work in a group with others, Smith was rude and disrespectful to anyone that attempted to engage him in the work. With all these challenges, I would never have guessed that Smith and I would end up having one of the tightest bonds in the class or that he would supersede the class in his blended learning growth.

About two weeks into the school year, it was time for the i-ready diagnostic testing and results. Although he was in 4th grade, Smith tested on a kindergarten level in both math and reading. This explained SO much to me! Smith had no clue what I was talking about when I was teaching. Smith could not read his classwork and Smith was extremely intimidated by working in groups with his peers because it would reveal his truth, which was that he was nowhere near where his classmates were academically.

Ideally, Smith would have had a teacher or other individual who could work with him all day to help get him where he needed to be, but unfortunately, that wasn't the case because our school budget doesn’t allow for that kind of one-on-one instruction. I immediately knew that I had to make drastic changes in the way I ran the classroom, specifically for him.

I started by digging into his student performance data, specifically, his i-ready diagnostics and his cumulative folder. With that information, I made Smith a classwork folder tailored just for him. On the front of the folder were five spaces for me to write in his completed assignments, and on the sixth line, it read “TREAT.” He knew that he had to complete all the lines above it in order to get the treat. Each morning, I would start the day off by teaching Smith a quick, 10-minute lesson. During the time that I taught the rest of the class their lesson, he would work on his differentiated classwork assignment.

Don’t get me wrong, it was not always perfect. There were days that he did not want to work, days that he gave no effort, and days where he looked at me and told me he didn’t feel like doing anything. That didn’t discourage me though. Smith was doing more work in 4th grade than he had done in multiple years combined, and we celebrated that victory! We celebrated amongst each other, amongst the class, and with administration! All of a sudden, Smith was getting overloaded with positive praise, and that was new for him.

Smith finished the year strong and was one of the top growth earners in our ENTIRE school! Reflecting on his story reminds me how powerful it is to show a child that you care. There is nothing special about me that made him want to do better. What made Smith want to do better was knowing that I cared enough to go out of my way to do things differently, just for him. He acknowledged that and was appreciative, and I am confident that I have forever changed his outlook on what education can do for him when he puts in the effort.

I use his story as a reminder to all educators that even the toughest students can learn and have a passion for education. The start of that passion for a student is us. We have to show ALL students that we have a TRUE passion for their academic success and that we care for them as people. When students know that we care, they care