On the heels of the anniversary of Brown v. Board of Education, and with so much in the news lately about racial and economic diversity in public schools, we wondered: How diverse are public schools in Duval County?

This Issue Review looks at the data and explores some possible implications for Duval County, especially with new school choice legislation that is likely to begin having an impact on local schools over the next several years.

Keep reading for an executive summary and interactive graphics where you can explore diversity in public schools throughout our city.

There is considerable evidence that greater socioeconomic and racial diversity in schools results in better academic and social outcomes for students. But here in our own community, we often find ourselves geographically separated by race and income level. While exploring Duval County school enrollment patterns, we found that African-American students are much more likely than students of any other race to attend schools that are not racially diverse (in this paper, defined as having a student body that is 60 percent or more of any one racial or ethnic group). More than half (54 percent) of all African-American students are in non-diverse schools, while less than a third (30 percent) of students of any other race attend non-diverse schools. When looking at income data, we find that among Jacksonville’s low- income schools, most (83 percent) are considered racially non-diverse and have African-Americans as the largest group.

Geographically, this data shows that many of Jacksonville’s low-income and African-American students are isolated in schools on the north and west sides of town, while schools in other parts of town are more racially and socioeconomically diverse — largely reflecting residential segregation patterns in Jacksonville as a whole. For a variety of reasons, the bottom line is that Jacksonville’s low-income African-American students are disproportionately more likely to receive their education in a school that is not racially or economically diverse. Because research tells us a lack of diversity comes with negative consequences for academic and social performance, this is a real equity issue. As policy changes are made at the national, state, and county level, our community must continue considering how to reduce economic and social segregation and promote diversity to produce a lasting, positive impact in our schools. 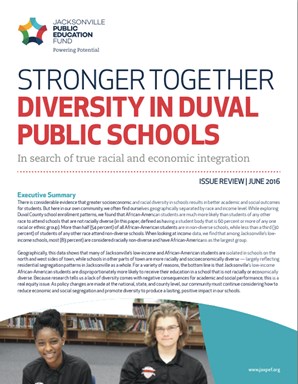 See below for the interactive graphics and explore! Then tell us what you think in the comments.