Joseph Frencl is 2014 Teacher of the Year 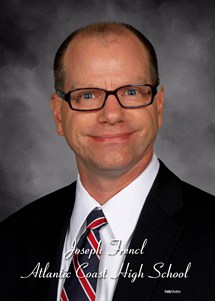 Frencl, who has been a finalist for Teacher of the Year in other years, was recognized as an outstanding educator who sees building relationships with his students as a key factor in his success. Understanding that math can be scary, he stood out for making even advanced calculus relevant and fun. Frencl and his students sing the quadratic formula song, chant the pattern for factoring sum and difference of two cubes, tell corny math jokes and get "pied" in the face in celebration of Pi Day.

His students' success speaks for itself. Since the 1999-2000 school year, 90 percent of Frencl's AP Calculus students passed the AP Calculus test and 34 percent scored a 5, the highest possible score.

As the Florida Blue Duval County Teacher of the Year, Frencl will go on to compete for the state-wide title.

The Teacher of the Year program, a joint venture of the Jacksonville Public Education Fund and the Schultz Center for Teaching and Leadership, is more than just one day of celebration. It includes the Wells Fargo Excellence In Teaching Seminar Series, which will make the best practices and live classroom demonstration of eight outstanding Teachers of the Year accessible to all teachers in Duval County. The Rotary Clubs of Duval County - the organization that founded the EDDY Awards tradition - provides individual cash awards and establishes five funds at the Jacksonville Public Education Fund for each of the finalists to use for a project at their school.

For more information about Frencl and all 161 school-level teachers of the year, go to www.eddyawardsjax.org.

"The community is inspired by the exceptional educators honored tonight at the EDDY Awards," said Trey Csar, President of the Jacksonville Public Education Fund. "We look forward to all of the great things that teacher leaders throughout Duval County will do in the coming year."

"Expert teachers know how to reach all students through their caring and their craft, elevating the profession and creating a culture of learning.  Congratulations!" said Deborah Gianoulis Heald, President and CEO of the Schultz Center.

"It is an honor to recognize the exceptional work of the educators recognized through the EDDY awards and all of the educators throughout our district," said Dr. Nikolai P. Vitti, Superintendent of Duval County Public Schools. "The role teachers play in the education and lives of our students is tremendous. Our district has seen and continues to see historical success through record achievement by students. These achievements can undoubtedly be credited to the diligent, consistent and hard work of our educators."

The other four finalists - as well as all school-level teachers of the year - were also honored at the EDDYs, which took place at the Times-Union Center for the Performing Arts. The finalists were:

The finalists were chosen from 15 semi-finalists after interviews with the Selection Committee. Teachers of the year from 161 schools were nominated, and evaluated based on their nomination packet, which included information about their professional development, classroom practices and knowledge of current educational topics.