Meet the 'Parents Who Lead' in Duval County 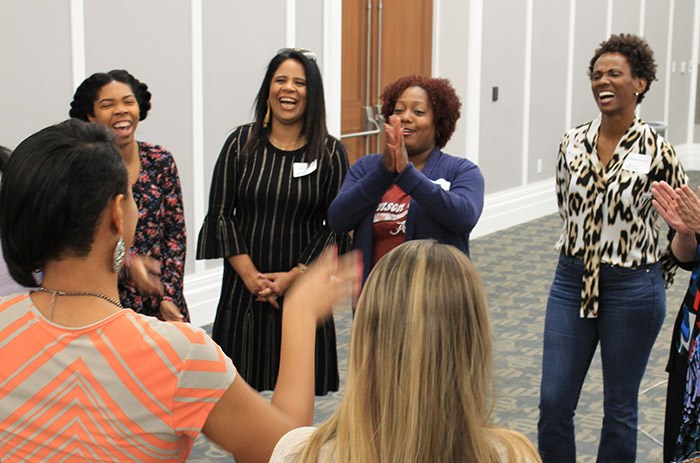 A group of parents and caregivers from Parents Who Lead does an icebreaker at the opening retreat on Sept. 22.

These are some of the issues that have motivated 21 parents and caregivers to join Parents Who Lead, a new initiative of the Jacksonville Public Education Fund (JPEF) in partnership with Duval County Public Schools and the Jacksonville Public Library. On Friday, JPEF finalized the list of participants from 34 highly qualified candidates, who filled out a questionnaire and met for in-person interviews as part of the selection process.

“I believe that there’s more to being involved outside of joining parent-run organizations at the school-level,” wrote one parent in her application, who shared a story about her child being bullied. “I want to ‘do something’ that I know will help more children, especially children of color.”

The inaugural class of parent leaders is an intentionally diverse group that reflects the many identities of people raising children in Duval County: mothers, fathers, and grandparents;  parents with babies and with college students, caregivers who send their kids to traditional public schools and charter schools; Latino, African-American and white parents; parents with college degrees and GEDs; Christians and other people of faith, including Hinduism and Islam. What brings them together is a commitment to improving the lives of all kids, not just their own.

“Achieving such real diversity in this first cohort is the fruit of the hard work of all of our partners, who recruited participants from all over the city,” said Rachael Tutwiler Fortune, Interim President of JPEF.

They also share a feeling that they need to learn more about the complexities of city government and the public school district to be effective advocates.

“I have attempted to advocate on the issues that concern me and have not found an effective method for change,” wrote another parent. “I would like to be a part of bringing positive change to our city as well as helping to develop our city’s citizens towards being more inclusive and accepting of all ethnicities and backgrounds.”

JPEF, in partnership with DCPS and JPL, decided to bring this renowned program to Jacksonville following our annual Public Education Perceptions Poll, which revealed 93.8 percent of Duval parents don’t know who their school board representative is. Most respondents, particularly local parents, are uncertain about how to get involved in public education at the decision-making level. The majority (74.6 percent) of Duval parents have not attended a school board meeting or contacted a school board member (73 percent).

The program is based on the evidence-based curriculum from the National Parent Leadership Institute, an intensive program that starts with a full day retreat and then continues with weekly three-hour classes for 20 weeks.

Parents are offered five components of training: A retreat to develop group and define mission; ten weeks on parent leadership with focus on voice, difference, values and family and community strength; ten weeks on how change occurs for children, including best practice, data analysis, model policy, network building and a communications framework; a parent- selected community project to practice civic learnings; and an Alumni Program, after graduation, to share projects and exchange information. Child care and food are provided during the evening classes to ensure the program is accessible to all.

Below is the full list of parents who were selected to participate.