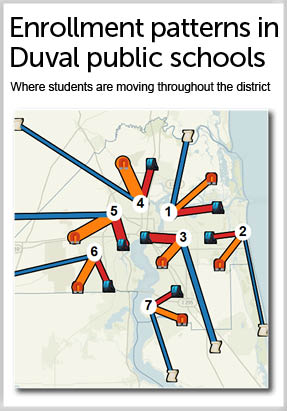 Although the implementation of an open enrollment policy throughout the district has been indefinitely postponed in order to gather more community input and allow for ample planning, there is still an important discussion centering upon the significant number of students moving out of their traditional neighborhood schools.

The interactive visualizations below show the extent of this movement based on data reported by Duval County Public Schools in their open enrollment proposal and recent budget community meetings.

The upper map shows the relative number of students in each district leaving their neighborhood school for magnet, charter or other options (i.e., voucher transfers, special transfer requests).

The bar graph on the lower left shows the trends for the number of students enrolled in charter schools and the bar graph on the lower right shows the trend in overall remaining non-charter district enrollment over the same period of time.  The lower graphs focus on charter enrollment specifically because the district cited this as an overall concern due to an increasing loss of funding available to support traditional schools as a result.

Before looking into the mobility data in the visualization below, let's first review the types of schools that will be discussed.

Neighborhood schools are the traditional public schools that students are assigned to attend based on their primary residence.

Charter schools are public schools that operate on a performance contract, or "charter," with the Duval County School Board, which frees them from many of the regulations that are created for traditional public schools, but are still held accountable for academic and financial results.

To learn more about charter schools and how they are created, click here .

Magnet schools give students the chance to attend schools that focus on themes or career areas of special interest to the student. More than 50 schools offer over 30 programs ranging from culinary arts and Montessori to computer science and the medical professions. Students can often follow the same magnet theme from elementary to middle and high school. Transportation is provided within established guidelines.

Duval County Public School's Superintendent, Dr. Nikolai Vitti, has highlighted that this year alone the district has faced the loss of nearly 9,000 students to charter schools. This decline in enrollment has resulted in the loss of over $50 million in funding for the district and is a trend that has been increasing over the past several years.

The increase in charter school enrollment is certainly not unique to Duval County. According to a report released by the  National Alliance for Public Charter Schools, in the 2013-2014 school year alone over 600 new public charters opened across the nation enrolling approximately 288,000 additional students. Florida ranked third in the nation for the most charter school openings this school year (75 new charters). This upward trend brought the number of charter schools nationally to over 6,400 serving more than 2.5 million students.

Trends in the Data

This year, the total movement out of the neighborhood schools exceeded 44,000 students. As shown in the visualization, almost half of the movement can be attributed to enrollment in magnet schools throughout the district (20,881 students).

The bar graphs show the increasing number of students moving to charter schools, along with the enrollment for Duval County as a whole. The bar graphs shows two opposite trends over the past ten years; the enrollment in charter schools has increased to over seven times the number of students, compared to the overall enrollment for Duval County, which has shown a decline of approximately 5,500 students.

To learn more, hover your cursor over the lines on the map and the bars on the graph below to see more information about enrollment and movement across the district.

NOTE: The blue lines representing charter schools on the visualization are intentionally longer and extend out of the district in order to emphasize that when students move to a charter school the money allocated for that student is no longer available to the district in terms of general funding.