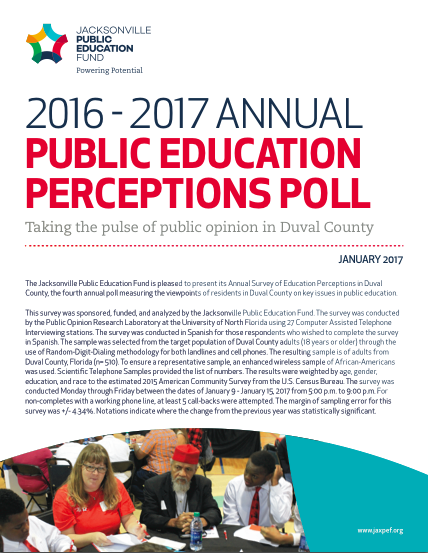 An overwhelming majority of public school parents in Duval County believe their children’s schools and teachers are effective, according to several questions — including some new ones — in the Jacksonville Public Education Fund’s annual Public Education Perceptions Poll, which measures both general community perceptions and includes several parent-only questions.

When asked to rate their child's school with a grade, parents were far more likely to give schools A's and B's than the state's grading system. Two-thirds of public school parents in the poll rated their child’s school as an A or B. By the state’s grading system, which is primarily based on student proficiency and growth on state-wide standardized tests, a third of Duval County schools are rated A and B.

Several questions this year asked poll respondents about the effectiveness of teachers in the county. More than three-quarters of respondents felt that DCPS teachers were effective with nearly a third (32.1 percent) citing teachers as the most important factor in deciding where to send their children.

“This poll shows that parents and community members agree: We must do everything we can to unleash the potential of educators in our community,” said Trey Csar, president of the Jacksonville Public Education Fund.

Another significant gap between perception and reality: On average, respondents thought the graduation rate was 62 percent, up from 61 percent last year but still far behind the advances of the actual graduation rate, which is 79 percent.

Among the other key findings:

The poll was sponsored, funded, and analyzed by the Jacksonville Public Education Fund, and  conducted by the Public Opinion Research Laboratory at the University of North Florida in early January. The sample of 510 adults was selected from the target population of Duval County adults (18 years or older) through the use of Random-Digit-Dialing methodology for both landlines and cell phones. The margin of sampling error for this survey was +/- 4.34 percent.

Take me to the full poll results with interactive subgroup tables >>