Opening event for ONE in THREE a huge success

Opening event for ONE in THREE a huge success

Last night, history was made at the Cummer Museum of Art & Gardens. A record crowd - over 1,000 people - attended the opening event for the ONE in THREE exhibit and launch of the ONE by ONE campaign.
Between the musical performances, kids' poetry writing exercise and self-portrait project, the ONEpush video project and of course the art itself, there was plenty to do.
The event would not have been possible without the support of numerous people who worked tirelessly to make it happen: the staff of the Cummer Museum, the ONEpush youth team, JPEF volunteers and interns, musical performers Blameless, Ron Rodriguez and Felicia Nicole and of course all the community partner organizations, sponsors and steering committee members who promoted the event through their networks. Allishia Edmonds and Travis Pinckney, two of the featured students in the exhibit, were lynchpins in the success of the event.
If you couldn't make it, never fear! The exhibit will be up at the Cummer until December 20, and will travel the city thereafter. And don't forget that the Cummer is free from 4-9 p.m. every Tuesday. Or, check out some of the sights and sounds of the event, posted here.
ONE in THREE featured students gather for a group shot at the exhibit: 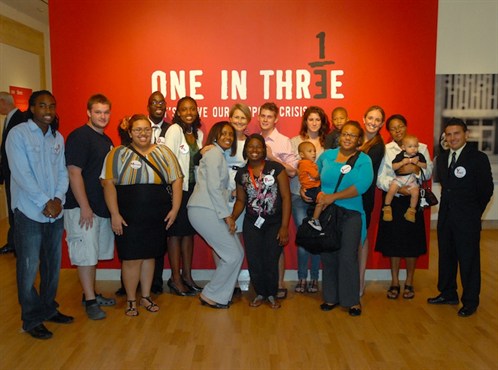 ONEpush members perform "ONE by ONE" - an original song.