Whitney Touchton, a graduate of Parents Who Lead, has partnered with Duval County Public Schools to bring implicit bias training to parents and educators. 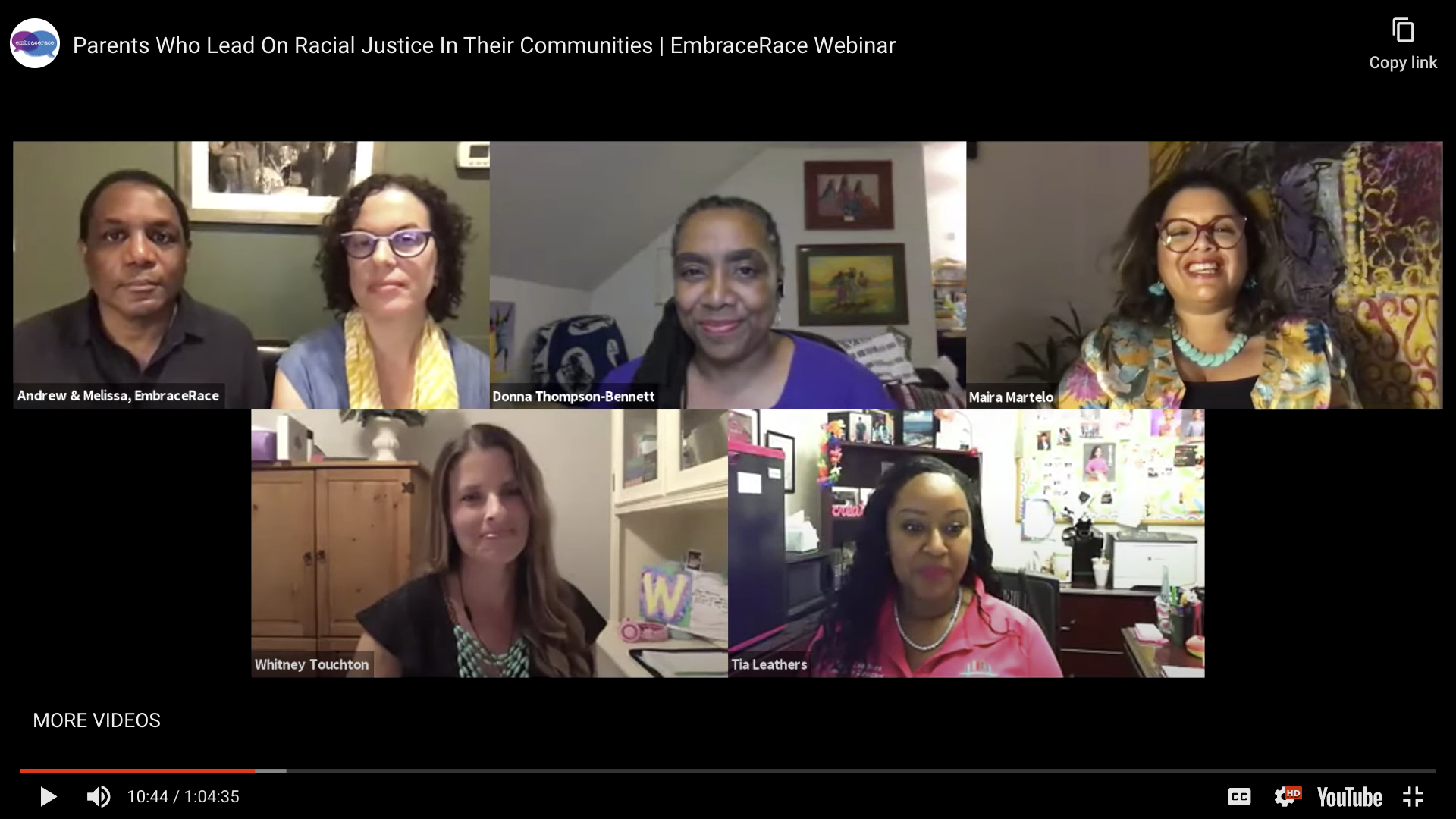 This summer, as protests erupted across the country over racial injustices, JPEF and our partners have been working to stand beside educators and parent leaders to advance education equity in Duval County.

Whitney Touchton is one of those parents.

Whitney is a graduate of the 2018 inaugural cohort of Parents Who Lead, a civic leadership program and partnership between JPEF, Duval County Public Schools, the Jacksonville Public Library and the Kids Hope Alliance.

“From the beginning of my participation in the inaugural Parents Who Lead program, I knew what the focus of my community project would be,” said Whitney. “Implicit bias.”

Implicit bias, as defined by The Kirwan Institute, “refers to the attitudes or stereotypes that affect our understanding, actions and decisions in an unconscious manner.”

Research has shown that all members of a society, no matter their own background, develop implicit bias based on the stereotypes they see through the media and through experiences in our deeply unequal society.

In schools, implicit bias affects the learning experience of students in several ways. Sadly, research has documented disparities in discipline for black boys as young as four years old linked to implicit bias in educators. Data shows black and brown students are not offered advanced coursework as often as their white peers.

That’s exactly what Whitney aspired to bring to educators and parents through her project.

Whitney, who identifies as a white woman, has been bringing her vision to reality in many ways. Last spring, she worked with Teachers of the Year to lead a panel on implicit bias and racial equity in the classroom at the WJCT TEACH Conference.

Last year, she supported a key leader at Duval County Public Schools to become certified in implicit bias. Vamecia Powell leads the Climate and Culture Department at DCPS and she is now a Certified Unconscious Bias Trainer with the Cultural Intelligence Center. This summer, she partnered with Tia Leathers, Executive Director of Family and Community Engagement of Duval County Public Schools, to offer an innovative, ten-week online program for parents and teachers about unconscious bias.

Mrs. Leathers, who is black, decided to take action after her second-grade daughter Taige told her she was afraid for the safety of her dad, a black man, after seeing the protests following the killings of George Floyd and Ahmaud Arbery. Ms. Leathers wrote an impassioned letter to Duval families inviting them to engage in conversations about racial equity through the new course.

The program is finishing next week. More than 475 people registered for the ten-week course, which covers concepts like cultural intelligence, talking to kids about racial and cultural differences, self-assessing one’s own bias, strategies for managing implicit bias and microaggressions, the everyday slights and indignities that people of color and other marginalized groups experience. Vamecia Powell is leading the course.

For the final session, prominent community leaders will speak to the participants, including Dr. Diana Greene, Superintendent of Schools, Lenny Curry, Mayor of Jacksonville, and Mike Bruno, Director of Patrol and Enforcement, on behalf of Sheriff Mike Williams.

“I have been always impressed by Whitney’s commitment not only with the implicit bias topic but with the children who are in most need in our community,” said Dr. Maira Martelo, Director of Strategic Engagements and Partnerships at JPEF. “Her passion for children is helping us to make sure we keep it at the forefront of all our efforts.”

“This partnership has helped to solidify the District’s efforts to ensure parent voices and concerns are heard,” Tia Leathers of DCPS said. “The Parents Who Lead program has allowed us to take the work of the Parent Academy to a deeper level of advocacy and our parents work with us to make things better as we are partners together in education.”

Last month, Whitney’s work with Dr. Maira Martelo of JPEF and Tia Leathers of DCPS was highlighted on a national webinar from Embrace Race. More than 700 people tuned in to hear about Whitney’s work and the role of parent leaders in advocating for racial justice in schools.

Finally, we want to share Whitney’s story in her own words. Read more about her journey toward racial justice activism below.

My name is Whitney Touchton.  I am a parent of three kids – one high schooler, one middle schooler, and one elementary child.

My husband and I have been married for 23 years, and we live what most people would call the nice suburban lifestyle on the “good side of town.” My husband is a native of Jacksonville. I’ve lived in the area since high school. I grew up in a military family and lived many different places and attended many different schools growing up.

When we began a family, we made sure to live where the “good schools” were and even after doing that, opted to utilize magnet, as well as private schooling at various points. Oh, and we are white.

We lived our lives and didn’t think much beyond our own experiences or understandings until about five years ago. We started on a learning journey that would propel us towards the realization that we were not only ignorant to how anyone else lived and benefiting from corrupt systems, but we were contributing to the perpetuation of these corrupt systems by the choices we were making.

Along came the opportunity to apply for a new parent advocacy training program being launched in Jacksonville called Parents Who Lead.  From the beginning of my participation in the inaugural Parents Who Lead program, I knew what the focus of my community project would be. Implicit Bias.

Implicit Bias, as defined by The Kirwan Institute, “refers to the attitudes or stereotypes that affect our understanding, actions and decisions in an unconscious manner.”  We all have Implicit, or Unconscious, Bias.  My own personal learning journey included learning what implicit bias is and how it affects our daily interactions with others.

While implicit bias can play a harmful role in many different ways, a key focus area in my learning journey was the significant role it plays with regards to racism. It can impact our “first impressions” and how we choose to feel, and therefore respond, to another person – even without our conscious awareness.

I knew that becoming aware of the concept of Implicit Bias as well as what our own biases are can greatly contribute to the self-awareness needed to keep our biases in check and therefore minimize their harmfulness towards others. I wanted to find a way to share this awareness with my community in a way that would impact a large number of people, as well as impact the next generation.

Partnering with Duval County Public Schools (DCPS) seemed the perfect setting and opportunity. The first opportunity came with the invitation to develop a breakout session at the local TEACH conference in the spring of 2019. I was connected with some fabulous educators within the district and conducted a panel discussion format where we were able to share about Implicit Bias and the role it can play within the education system.

The next opportunity came when I was able to coordinate fundraising to send a district employee to receive a professional Implicit Bias trainer certification from The Cultural Intelligence Center. Vamecia Powell, who heads up the Climate and Culture Department within DCPS, went through the certification process and was able to implement an Implicit Bias training offered through her department for educators and administrators within the district. In early August, a second leader at the district, Tia Leathers, Executive Director of Family and Community Engagement, also completed the training and certification.

Upon the increased national attention and discussion around racism this spring, DCPS wanted to broaden this training to be available to the community as a whole and developed a virtual 10 part series through the Parent Academy that is finishing its weekly sessions next week.

Some of the tangible outcomes I hope to see come from this project are:

These are big goals.  Big goals are made up of small steps.  We are taking those steps…one at a time.