Parents of DCPS share their expectations at School Board Candidate Academy 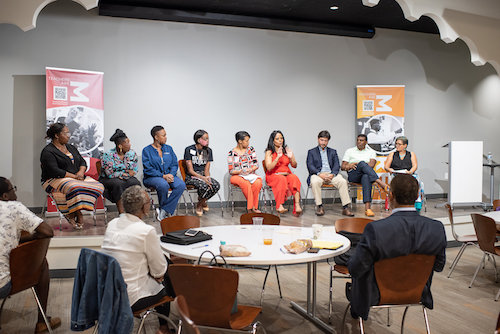 Guest Blogger Benjamin Cummins is a summer fellow at the Jacksonville Public Education Fund (JPEF). He graduated from Indiana University in 2016 with a major in Sociology and with minors in Social Welfare Advocacy, History and French. After college, Benjamin served with City Year Jacksonville, an AmeriCorps organization, for two years. Benjamin’s long-term goals include pursuing a Master’s degree and PhD in developmental psychology, becoming a school psychologist, and continuing work on improving the educational landscape for underserved communities. In his work with JPEF Benjamin will use his insight from his recent work in DCPS schools to focus on the Teachers are More Campaign.

As a community, we have a responsibility to work together to improve conditions for the next generation. That is why it is critical for those seeking public office to hear from their constituents about the issues they believe to be most important. The first School Board Candidate Academy held earlier this month connected candidates for Duval School Board with local parents, teachers, students and retired school board members to learn what these groups believe are priority areas to improve education in Duval schools. The Academy included a Data Walk and four panel discussions.

The Parents Voice panel provided an opportunity for candidates to hear from diverse parents and caregivers with students in the Duval County Public Schools (DCPS) system. This included parent/caregivers with students in elementary, middle, and high schools, as well as students in programs such as Exceptional Student Education (ESE) and Dual-Language programs. Although the parents had varying perspectives, they all made one thing abundantly clear: their children’s educational experiences are crucial as are the duties of being a school board member.

Despite shortfalls in the 2018-19 budget, parents felt strongly that key programs should not be cut. When discussing ways to improve our school system, it came as no surprise that the DCPS budget was a recurring topic among all of the panel discussions. DCPS faces a $62 million deficit in their budget, which means that cuts in resources and school programs will occur for the 2018-19 school year. With that in mind, panelists were asked what they want to see remain funded by the school board.

Parents stressed the importance of access to resources and suggested that those resources are not shared in an equitable way across all DCPS schools. They also touched on the importance of the quality of the resources provided to both students and their parents and guardians. “I actually went to my brother's class … and [they do] not even have a textbook. It’s not even a textbook. It's like a paper copy that's now been placed in a binder. And it's black and white. There's no color pictures. So it was more depressing.”

“We need to re-engage our students,” one parent said while speaking to the struggle that teachers often face balancing all of the needs of the students in their classroom.

Another parent referenced research conducted in Texas that found evidence suggesting more recess time improves academic performance in students. “Don’t take out recess. Keep paying PE teachers to come in. And [keep funding] the arts. It’s a whole other side of the brain that helps solidify learning...So, basically, don’t take anything out.”

Parents expressed unanimous concern and desires to see the quality of afterschool programming improve. Many of the discussion centered on how afterschool programs are more focused on non-academic activities. Several parents felt that their children’s learning was suffering because of it. The parents on the panel also pointed out that usually when teachers are staying after school to help with tutoring, they’re doing so on their own dime.

School safety is another area parents would like to see the school board candidates prioritize should they be elected into office. Several parents took issue with the money that was put toward the new safety mandate requiring all Florida schools to have an armed school security assistant on campus, wishing that the money instead went toward impactful mental health or mentorship programs that they feel the schools need. One parent applauded how the new policy would allow any leftover money from the safety measure to be put toward mental health support, but lamented that mental health was not being given first priority.

“I speak on the voices of the parents who are not here that we begin as a society to create a safer space for those who are marginalized and those [include] our young people who are gay, lesbian, bisexual, transgender, and questioning,” said one parent.

“There should be someone to save our kids,” stated another parent. “And that can be the [School Safety Assistant], not the kids or the teachers having the guns in their class.” one parent said.

Parents also felt overwhelmingly that school board members should prioritize parent and community engagement. Each parent voiced a desire for more communication and interactions with the Duval School Board. they want to feel like their board members know them as more than just constituents.

Making true progress and improvement in Duval County schools is going to take involvement from the whole community. This sentiment was made clear by the thoughts shared during Parent Voice:

“I will say this to you: Showing that you care will get me to show that I care,” said one parent. “If you show me that you're interested, I'm gonna match that. And, I'll probably exceed it. Because you will have a friend for the length of my children's academic career in Duval County school systems.”

It is critical that school boards and school board candidates listen to community stakeholders and proceed with the intention to realize their hopes for the future of our city. By having these critical discussions, we can continue to normalize and nurture community leadership and involvement.

Members of the public are invited to join us for the School Board Elections Public Forums that will be held in August at the Jessie Ball duPont Center at 40 E Adams Street. Click below to register or follow us on Facebook and participate in the forums LIVE from the comfort of your own home.