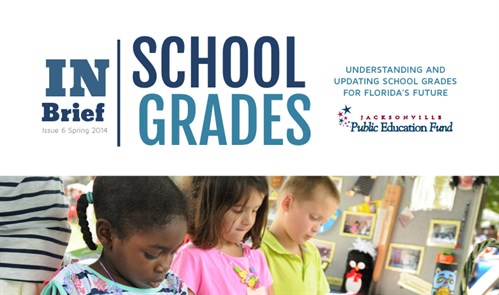 >> NEW! Testing and accountability debated in the Senate

October 7: Why the state should suspend school grades for one year

October 7: How you can take action

July 11: First round of 2014 school grades are released

June 6: FCAT 2.0 results are released  for the last time

May 23: FCAT 2.0 writing and third grade reading and math results are released

March 13: What's happening in the Legislature?

inBRIEF Issue 6: Understanding and Updating School Grades for Florida's Future examines the current school grading formula and looks at several potential fixes that could make the system more meaningful and stable. Among them: 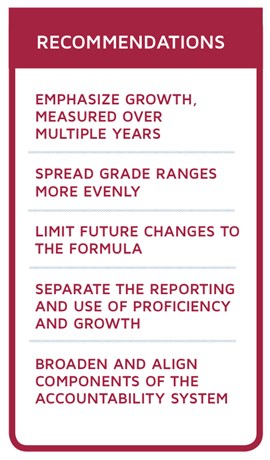 - Emphasize student growth, and measure it over multiple years instead of just one.
- Spread the grade ranges more evenly to avoid instability.
- Change the formula only every few years.
- Use student growth and proficiency separately to ensure schools are rewarded or penalized based on performance, not demographics.
- Broaden and align the components of the accountability system.

Florida has the oldest A-F grading system in the country, and the formula has changed 16 times in the last three years. With the transition to new standards, now is the time to evaluate what works about the system, and what should be updated and improved, in order to build a modern school accountability system.

It's important to do so: A recent poll conducted by the Jacksonville Public Education Fund shows that test scores and school grades are by far the most important factor listed by the public in evaluating a school. In addition, many state-mandated rewards and interventions are dictated by the grades.

The release comes on the heels of a Senate Education Committee meeting where lawmakers and Florida Department of Education Commissioner Pam Stewart began the conversation around school grades and accountability in light of the transition to new academic standards and a new assessment.

Want more data? Check out an interactive version of the chart that plots schools by growth and proficiency. Click here to explore the visualization.

Read the report? Write to your elected representatives in the Florida House and Senate, and to Florida Education Commissioner Pam Stewart. Let them know your ideas for how to modernize Florida's school accountability system. Your voice matters! Make it heard with these easy tools.  >> Start here.