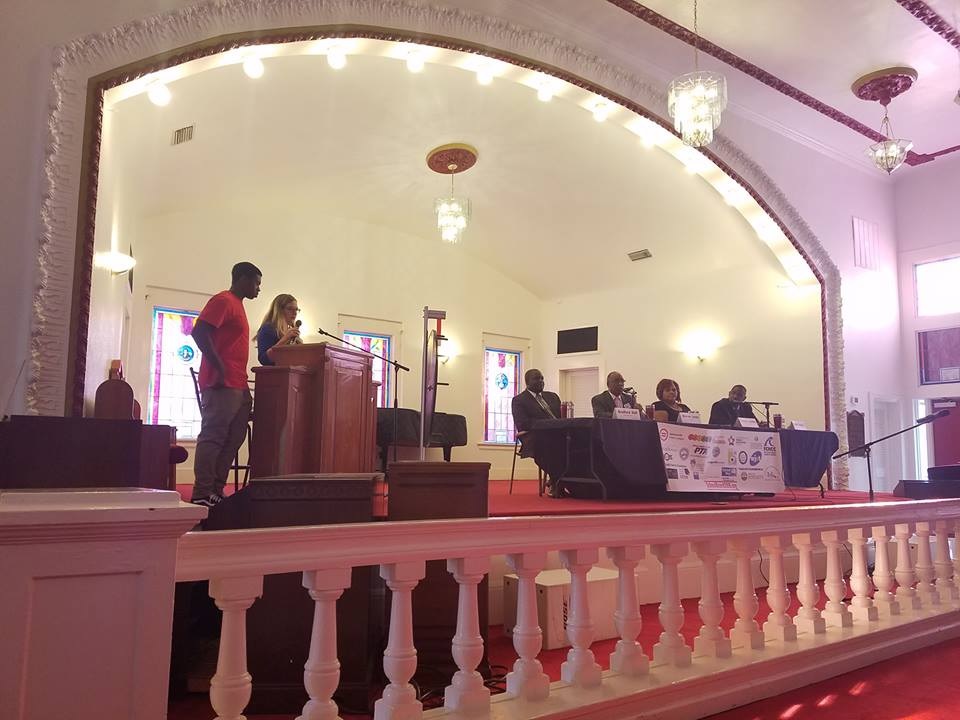 Guest blogger Latasha Myers is an intern at the Jacksonville Public Education Fund who spearheaded our efforts with the School Board coalition this summer. She worked with coalition partners to make the public aware of the Duval County School Board Elections and inform the community about the candidates that are running.

On Monday evening, the four candidates running to serve as the next school board member for District 5 spoke about their priorities for Duval County Public Schools. Bradford Hall, Warren Jones, Brenda Jordan, and Hank Rogers engaged in a great discussion during the forum and answered many audience questions.

One audience members asked: What is your perspective on the graduation rate and the tiered diploma system?

Jones offered that graduation rates can be improved by identifying students who are struggling early on. He said that students who are not in classes with their age group can be placed in special classes that will help them get caught up.

Jordan said that she is concerned that too much academics are being drilled into students, but students cannot apply those skills to the real world. She said she wants to make sure that kids are ready for the workforce or college as soon as they come out of high school.

Rogers said that increases for high school graduation, especially among black students, are moving in the right direction. To keep momentum going, he suggested bringing parents to the table during their student’s 9th grade year so that they understand what courses their kids will be offered over the next four years. Rogers mentioned that a lot of students are graduating with only 18-credit-hour degrees. Parents and students are unaware that 18-credit-hour diplomas limit students’ choices to only a community college. At the end of the day, students shouldn’t be labeled just to increase graduation rates, Rogers said.

Bradford Hall noted that high school graduation rates in Duval County among African American males have risen a lot since 2011. However, there is still a “pushout” problem in schools, Hall said. Hall mentioned a story where he saw firsthand students who didn’t have enough credit to graduate on time being pushed into charter schools to make the school they were in appear that their graduation rates where high.

The discussion on Monday night continued with candidates offering their visions for bettering public schools in Duval County. If you couldn’t make it to the forum, we encourage you to watch the full recording online.

Polls are open for early voting starting August 15-28, and the election day is August 30. In addition to the District 5 seat, there is also an open seat and multiple candidates vying for that seat in District 7. If you live in District 7, you can view the District 7 candidate bios and find out more information about the election at SchoolBoard2016.org.