Many know that the Rotary Clubs of Duval are great supporters of teachers and public education — but did you know that they are also the founding organization of the EDDY Awards?

Since 1991, The Rotary Clubs of Duval County have been providing financial awards for the Teachers of the Year finalists, demonstrating Rotary’s commitment to youth in Duval County and to providing recognition commensurate with the excellence these exemplary teachers bring to their classrooms each and every day.

The mission of the Rotary Foundation is to enable Rotarians to advance world understanding, goodwill, and peace through the improvement of health, the support of education, and the alleviation of poverty. The Foundation is the funding source for the dollars raised by Rotary Clubs around the world in cities and towns – all working under the creed of Service Above Self.

If you know any Rotarians, it’s no surprise. But there’s one right here in Jacksonville who stands out as the “father” of the EDDY Awards.

In 1991, John Kattman attended a very modest Teacher of the Year recognition ceremony in City Hall featuring a tray of cookies and a small token award bestowed on the Teacher of the Year.  John shared what he saw with his fellow Rotarians in the Deerwood Rotary Club and all agreed that more needed to be done.

Twenty five years later, the Teacher of the Year nomination and selection process has grown into a year-long celebration that begins in early August and culminates seven months later with the crowning of the Duval County Teacher of the Year. On March 12, 2016, that event boasted close to 1,000 participants at a gala at the Hyatt Regency Jacksonville Riverfront Hotel.

Last month, the Deerwood Rotary Club, led by John Kattman and Brian Mendelson, hosted the five 2016 Teacher of the Year finalists at a beautiful tribute breakfast at the Deerwood County Club. John is the past president of the Deerwood club, and Brian has participated in the final selection committee process for the past several years, representing Duval County Rotarians.

For 25 years, John has been the driving force making sure that the celebration of Teacher of the Year matches the stature and hard work these educators exhibit in their classrooms. He presented each of the finalists with an additional cash award on behalf of the Deerwood Rotary, and Kay Park, 2016 Duval County Teacher of the Year, asked each guest to think about a teacher that made a difference in their lives during her remarks.

Duval County Public Schools and the Jacksonville Public Education Fund salute the Rotary Clubs of Duval County and thank them for their continuing support and enthusiasm as we begin planning for the 2017 gala celebration! 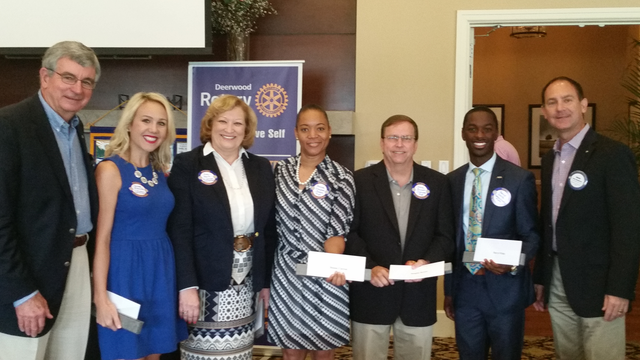