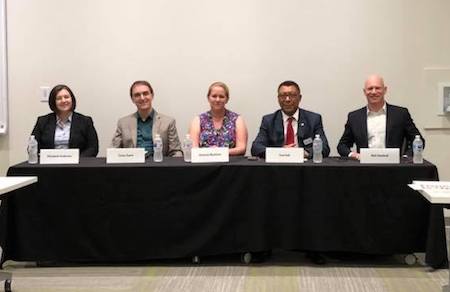 More than 4,000 people watched the three Duval County School Board candidate forums hosted by the Jacksonville Public Education Fund during the first week of August. Most candidates running for Districts 4, 2 and 6 attended the forums, which appeared in the news feeds of more than 17,000 people as of August 13th.[1]

While JPEF has held candidate forums in the past, this was the first year we promoted them as in-person or virtual events broadcast via Facebook Live to expand our reach. JPEF prepared some preliminary questions for candidates, while audience members submitted most of the questions both in person and through Facebook.

You can watch the video of each forum below, and read our summaries of the topics discussed. Early voting is August 13-26, and the primary election is August 28.

-Teacher evaluation, including the use of value-added measure scores

-Professional development for teachers and principals

-Relationships with other board members

-Support for students outside of the classroom (wrap-around systems), including through partnerships with nonprofits such as Teach for America (TFA)

-Positions on charter schools and how to work with them

-Relationship with the philanthropic community

-Safety in the schools

-Relationships between board members

-Budget issues, including how the state allocates funding

-Relationships with the philanthropic community

-Value-added model scores and their role in teacher evaluation

-Teacher issues, including recruitment and retention

After the forums, JPEF asked participants who watched in-person or online to answer a few questions about their experience. Of the 46 people who filled out the exit survey, the majority of audience members were satisfied with the forums (94 percent). In addition, 98 percent felt they learned more about each candidates’ position on important education topics and felt better prepared to make an informed vote decision as a result of attending the forums. Finally, the majority of participants (98 percent) felt that candidates talked about education issues that were important to them.

High participation in the forums also reflects an apparent increase in civic engagement this year over the last election in these districts four years ago.

As of August 3, there were about 17,000 more registered voters in Districts 2, 4 and 6 than there were four years ago, the last time these districts held school board elections.[2]  At that time, in 2014, there were 42,467 people who voted in the primary elections.[3] To put the reach of these forums in context, the number of people exposed to and/or viewed the three forums was about 41 percent of the 2014 turnout.

School Board members make important decisions that will have a direct impact on the quality of public education our children receive. Kids can’t vote, but you can. Our city’s children are counting on you, the adults, to elect one of these great candidates to represent them at DCPS.

[1] Reach on Facebook refers to the number of people who were exposed to our videos which may or may not include people who actually viewed the video in its entirety.