School Renaming: JPEF calls for student voice to be at the center of school renaming

JPEF President Rachael Tutwiler Fortune sent a letter to the School Board and Superintendent following a vote by the JPEF Board of Directors. 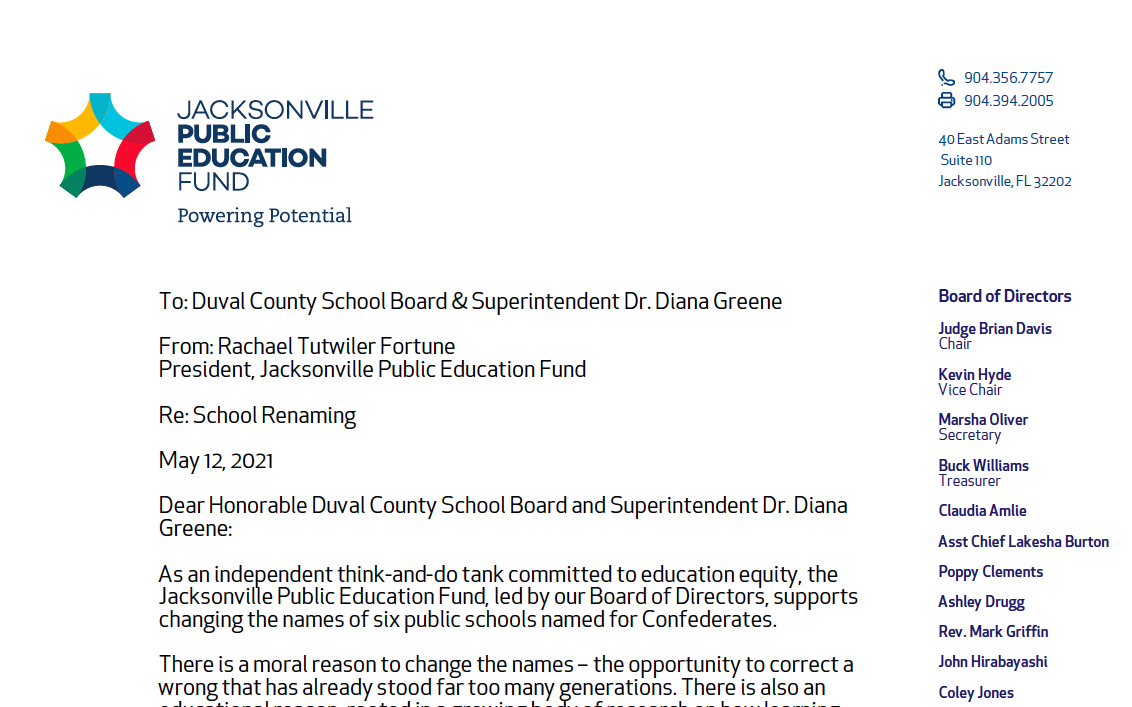 Following a vote of the Jacksonville Public Education Fund Board of Directors, JPEF President Rachael Tutwiler Fortune sent the following letter to Superintendent Dr. Diana Greene and the Duval County School Board on May 12, 2021. You can also review the letter here. Donations can be made to the School Renaming Fund here.

As an independent think-and-do tank committed to education equity, the Jacksonville Public Education Fund, led by our Board of Directors, supports changing the names of six public schools named for Confederates.

There is a moral reason to change the names – the opportunity to correct a wrong that has already stood far too many generations. There is also an educational reason, rooted in a growing body of research on how learning happens.

A series of research reports from America’s Promise Alliance, “How Learning Happens,” explains that learning is a social emotional process that works best in the context of caring relationships. Students’ feelings of agency and belonging in school are essential to great educational outcomes. Young people are learning constantly from the world around them – and they take cues from adults about their potential for success and their value in our community. Even young children notice racial differences and draw conclusions based on the role models they see and the racial experiences they have, according to the American Psychological Association. When students feel that their educations are not valued, they disengage from school and all the opportunities their education brings.

The Confederate States of America was founded to preserve race-based slavery. When our schools were named for Confederates, open racism was a normal part of living in Jacksonville. Robert E. Lee High and Kirby-Smith Middle were named in the 1920s, when public lynchings took place right here in Duval County. Other schools were named in the 1950s and 1960s, when local and state officials were resisting school integration. These actions were rooted in the belief that people with dark skin – even children – were inferior.

Today, public schools are working extremely hard to promote the exact opposite idea. The mission of public education is to invest in the potential of all children because all children are smart, capable and worthy of high-quality educations.

Student leaders at Lee High School have made it clear at community meetings that they feel this contradiction every day. Especially since the School Board voted to begin the renaming process, they have felt the negative impact of the name. They have witnessed community members making racist comments about them in their own school’s auditorium.

JPEF has worked extensively to center student voices, from the ONE in THREE exhibit to our year-and-a-half-long Student Voice initiative. The North Star for this decision should be student voice. Especially since the School Board has asked for student input, they now have a particular obligation to hear our students’ pleas.

Finally, I want to say a word about the cost. JPEF has been proud to support school renaming as a fiscal agent on the School Renaming Fund, which allows private dollars to help offset the costs of renaming. JPEF is committed to helping in this way, and we also want to make clear that we don’t believe there is a case to vote against renaming because the effort may require public funding. Renaming schools is an investment in student learning. We look forward to working together in a public-private partnership to pay for the investment.

This conversation has not been easy, but it’s long overdue. We thank you for your leadership, and we look forward to working with you to create a better future for our children.