Looking for the Third Annual ONE by ONE Convention?

Start here. At this time, we are no longer accepting applications for 2015 ONE by ONE Delegates.

The Second Annual ONE by ONE Convention: Moving Public Education Forward took place on January 18, 2014 at the Prime Osborn Convention Center.

There, 400 community delegates and leaders assessed key indicators of progress toward the priorities in the Community Agreement and made 1,090 pledges to take action on advancing the priorities. The convention was publicized with media coverage from five media outlets and appeared on the front page of the Florida Times Union.

94% of delegates said they "feel more positive about the future of education in Duval County Public Schools."

Volunteers on the Social Media Brigade and delegates shared their excitement and pictures on Twitter, Facebook and Instagram using the hashtag #onebyonejax. There were 1,300 posts on social media using #onebyonejax - which means there was a post every 17 seconds! And #onebyonejax was the top trend locally. 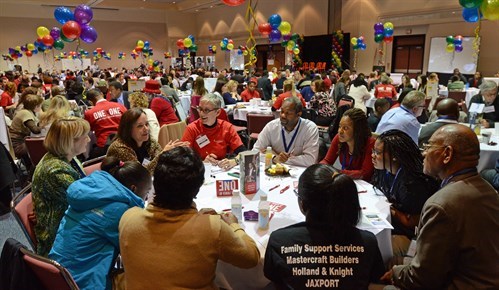 Check out the live blog below for a recap of the action. See photos from the convention here.

Couldn't join us for the convention? You can still take the pledge and get involved in all the action! Start here >>

5 Combined ONE by ONE Community Agreement & School District Priorities

YOU can continue the efforts to advance the community priorities. Become a delegate!

Delegates are passionate about public education, they're ready and willing to take action and advocate throughout the year. Delegates are community leaders, representing different perspectives and experiences. Check out photos of the delegates from the Second Annual ONE by ONE Convention!

Make your pledge today. Also, check out the Duval County Public Schools 2013-2014 Strategic Plan Update that was presented at the convention.

To learn how you can get involved, contact Maira Martelo, Community Mobilization Director, at (904) 394-0951.