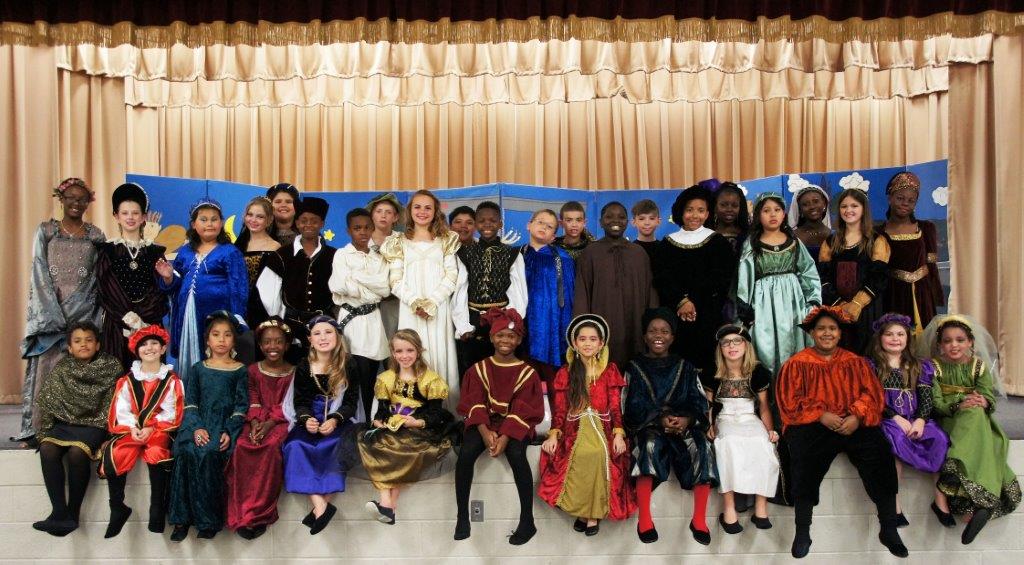 This spring, I had the opportunity to witness a teacher’s vision come to life through a PowerUP Jax grant. Priscilla Hardage, a fourth grade teacher at Chimney Lakes Elementary School, was awarded one of the competitive grants funded by Community First Credit Union. She used the grant money to purchase playbooks of Romeo and Juliet, a Midsummer Night’s Dream, and several others. In her application she wrote, “What better way to spark and stimulate the imaginative creativity of students than introducing them to the literary genius of Shakespeare?”

Such a treat it was to witness their production of Romeo and Juliet! I watched as students and teachers piled into the school’s auditorium for the production as the anticipation of the event increased. When the curtains opened, student actors in full costume were revealed in front of a detailed and colorfully decorated set. The students recited their lines with ease — despite being the original words of Shakespeare!

Modern day songs and narration were intertwined within the play, which kept the young audience up to speed on the events in the story line. It was evident that weeks of preparation and practice were put into the fabrication of the performance – and it was well worth it. Students throughout the school were introduced to Shakespeare in such a way that was enjoyable, comprehensible, and fun. I have no doubt that imaginations were stirred and aspirations were ignited throughout the room.

If you are a teacher in the Duval County Public School system, we encourage you to submit a PowerUp Jax grant application this upcoming fall. Through ingenuity and vision such as that of Priscilla Hardage and others that were awarded grants this past school year, teachers have the ability to gather additional resources for their classroom to use on creative and innovative projects.