Student to student: The impact of ONE in THREE

Student to student: The impact of ONE in THREE

It's the week before students are out for the Christmas vacation from school. Many of them have learned important academic lessons this fall, but some have also developed socially as a result of their experiences with the ONE by ONE campaign, and it's associated ONE in THREE exhibit. 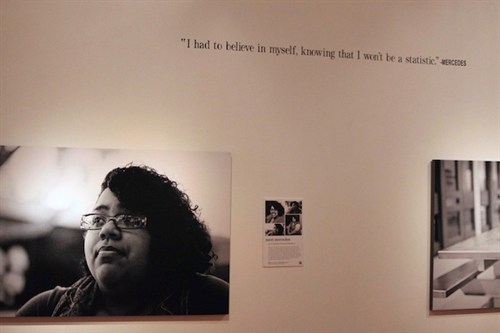 Above: Mercedes' portrait on the wall
Thanks to a grant from Comcast, students have been bused to the Cummer Museum of Art & Gardens throughout the fall for free field trips to view the ONE in THREE exhibit and to participate in a powerful curriculum that the JPEF developed in partnership with the Cummer education staff, local DCPS teachers, students and community representatives.
Recently, Douglas Anderson School of the Arts hand-picked a group of 15 students to have one of these transformative experiences. By joining these students for the trip, JPEF and featured student Mercedes Trapp saw the full impact of the curriculum for the first time.
After a brief overview of the exhibit, the students started by walking through the Jacobson Gallery and then gathered to reflect on connections and lessons learned from the stories.
Unexpectedly, students began to open their hearts to each other. Inspired by the stories of the 20 students in the exhibit, they shared their own experiences as students in our public schools and as youth in our community. Students spoke candidly about experiencing homelessness, feeling alone and attempting to commit suicide.
As the group opened up to each other, something shifted. JPEF representatives became emotional, realizing that the depth of this experience far surpassed expectations of a ordinary field trip.
Douglas Anderson has named these students "Ambassadors" to each other and to their peers. On a weekly basis, the school faculty gathers this same group of students together as an ongoing leadership and support group.
Next week, DA will be bringing a second group of specially selected students for a similar experience at the Cummer. As for JPEF, we are connecting with DA hoping to engage these two dynamic groups of students in the ONE by ONE campaign conversation process and to get them empowered otherwise through the campaign this year.
--Rachael Tutwiler