It has been some years since I found myself on board a yellow school bus, and never one filled with the chatter and anxious energy of adults instead of children.  But on Thursday, I found myself spending the morning hours riding through the neighborhoods of Northwest Jacksonville with teachers from the Duval Transformation Office schools, and they were every bit as excited as a bus filled with kids on the first day of school. The community tours, planned by Duval County Public Schools, were just the first of what will likely be many efforts to connect the teachers and staff at each of the 36 transformation schools in the Raines, Ribault and Jackson feeder patterns with the communities they serve.

While some principals have done tours with their teachers at the beginning of the school year in the past, never have they been done on such a large scale and within an entire feeder pattern. Such a widespread effort does more than just acclimate teachers to their surroundings - it also gave teachers from the elementary and middle school levels the opportunity to interact with teachers who will one day teach the same students in high school.

During my ride through the various neighborhoods whose children attend schools in the Raines feeder pattern, I was periodically given tidbits of historical information from the principal of Raines, Vincent Hall and the principal of North Shore elementary, Felicia Hardaway. Many of the passengers on the bus were graduates of Raines themselves, or of the two other high schools in the DTO (Jackson and Ribault).  As we rode along Moncrief Road, we passed St. Clair Evans Academy and a couple of the small apartment homes that house many of its students. We passed the campus of Edward Waters College, and many of the teachers gave shout outs to their alma mater.  Mrs. Hardaway pointed out the JP Small Park, where she informed us that the Negro League Baseball teams used to play in the 30's and 40's. 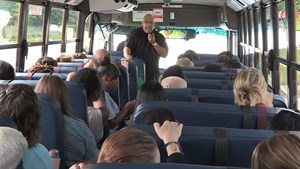 Yet in the midst of the rich historical stories and references, it was impossible to not take note of the extreme poverty and urban blight that could be seen around every bend: buildings and residences with cracked, boarded up windows, large open swaths of land with waist-high weeds and overgrown trees, few grocery stores but several corner marts and fast food eateries; the same kinds of telltale urban landmarks I saw in cities like Washington, D.C. and Philadelphia when I lived there. 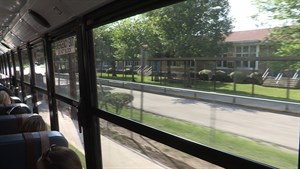 So what happened? And how do these things affect the students that attend school in the DTO? Why are we quick to speak about how poverty can influence student achievement, but hesitant to discuss how and why poverty exists?

I do not have the answers to these questions, but I do believe that continuing to have these conversations can only result in positive outcomes. I commend the district for taking this step towards integrating the teachers in the DTO schools with the communities in which their students live. And I commend the teachers within the DTO schools for the tireless jobs that they do every single day with passion and with nothing but the utmost care for their kids. The disparities between the rich and the poor in this country are startling and the chasm just continues to grow. I'm grateful to be a part of a movement in Duval County aimed at narrowing that gap through equal educational opportunities for all students. The road is long, but we have to travel it, not for ourselves but for our children.