Earlier this week the Florida Department of Education revealed the proposed changes to Florida's new K-12 English Language Arts and Mathematics standards. Florida's Commissioner of Education, Pam Stewart, stated that although the changes are "minor" they will serve to strengthen the adopted standards. The proposed changes include a total of 46 revisions to the original Common Core State Standards (13 to the English Language Arts standards and 33 to the Math standards), as well as the addition of 52 Calculus standards that will carry over from the current Next Generation Sunshine State Standards.

The Department did not develop these proposed changes single-handedly, but relied on feedback from over 19,000 comments and recordings from public hearings held across the state. The Department worked alongside a team of Florida teachers and subject area experts to review a third party analysis of the comments and recordings gathered, which resulted in the 46 proposed changes. The third party analysis of the Florida Standards Public Input Period is available online on the Florida Department of Education's website.

During two available Rule Development Workshop webinars earlier today representatives from the Florida Department of Education reviewed each suggested change and answered questions from those participating in the call.  One of the questions was whether the suggested changes exceeded the 15% Rule, which states "a state adopts 100% of the Common Core in ELA and mathematics with option of adding up to an additional 15% of standards on top of the core."[1] Although unable to provide the exact percentage at the time of the webinar, Mary Jane Tappen from the FDOE shared that the Department would look into the percentages of changes in reference to this rule and assured the state was not bound by any Common Core copyrights.

A Closer Look at the Proposed Changes 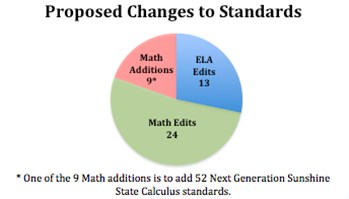 Of the 13 changes to the English Language Arts standards most were made to ensure the standards are appropriate for the grade levels assigned, along with those revised to include cursive writing into the standards. An example of a change made to an ELA standard to clarify for grade appropriateness is shown below.

Current Standard (LACC.K.RL.2.4):Ask and answer questions about unknown words in a text.

Proposed Standard (LACC.K.RL.2.4):With prompting and support, ask and answer questions about unknown words in a text.

To view the proposed changes for the English Language Arts standards, click here.

The revisions to the Math standards, on the other hand, were a little more diverse; some which were made to include more direct references to instruction on money and different aspects of measurement within the standards, along with a major change, the inclusion of 52 Next Generation Sunshine State Calculus standards. The inclusion of the Calculus standards was suggested to ensure Florida schools are addressing the increased attention on STEM content areas and to further prepare students for the college-level coursework they will encounter in postsecondary education.

To view the proposed changes for the Mathematics standards, click here.

The Next Steps for Proposed Changes

The proposed changes will be presented by Commissioner of Education, Pam Stewart, to the State Board of Education during their February 18th meeting in Miami.

Even with the minor changes proposed, the strength of Common Core standards shines through, which is the ability to compare student performance and smooth transitions between the 44 states and the District of Columbia, which have fully adopted the standards. The revisions suggested are another step toward strengthening our state standards and ensuring that all Florida students are college and career ready.