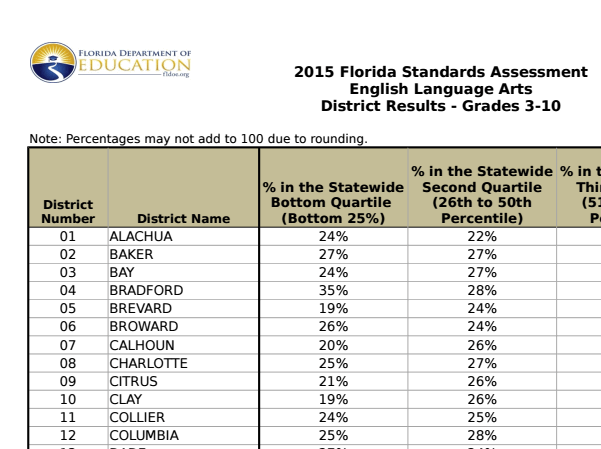 It seems like information is dripping out daily about shifts in Florida’s school accountability system. Today’s release of information about the relative performance of districts on the 2015 administration of the Florida Standards Assessment has a lot of people confused. If the Florida Board of Education isn’t deciding on cut scores until January, what does this information mean?

What was released today basically shows how many of each district’s students falls into quartiles — ie, how many students in the district were in the lowest 25 percent of test takers statewide, and so on.

The reality is that these results are going to confuse a lot of people. So here’s a quick summary of what this data can and can’t tell you.

What you CAN’T learn from this information:
•    Whether students are considered proficient or not. Since cut scores of what constitutes proficiency have not been set yet, we still don’t know which students have met that standard and which have not.
•    Whether schools and districts are improving from one year to the next. Even when cut scores come out, there is no way to measure growth between 2014 and 2015 because the standards and the test changed. We won’t know whether students, schools and districts are improving until summer 2016.

To see the results from all of the districts in the state of Florida, download the PDFs from NPR State Impact Florida. For individual schools click here for English language arts and here for math.