In August, Superintendent Nikolai Vitti announced several proposed boundary and program changes. Part of the rationale behind these changes is that enrollment throughout the district has changed, and our boundaries must change to promote efficient use of facilities and resources. Twenty-two schools in the district would be impacted by the proposed changes. You can find a full list of the proposed changes at www.jaxpef.org/boundarychanges.

Over the last 10 years, Duval County has seen dramatic shifts in enrollment patterns, with limited new enrollment (for more information, visit the Florida Department of Education's website). While enrollment throughout the district (both in public and charter schools) is increasing, it is doing so at a much slower rate than in the past. Overall, the district is getting smaller in terms of student numbers (for more information, check out Duval County Public Schools Student Population 2015).

This can be explained by the smaller new student enrollment and the graduation of large classes of high school students. On average, each zip code in Duval County has gained approximately 66 public school students since the 2005-06 school year. While this average is positive, some areas and individual schools have experienced severe decreases in enrollment.

Below is a map of Duval County by zip code. This map shows the total change in public school enrollment in each zip code between 2005-06 and 2015-16, including charter, alternative, and exceptional schools. 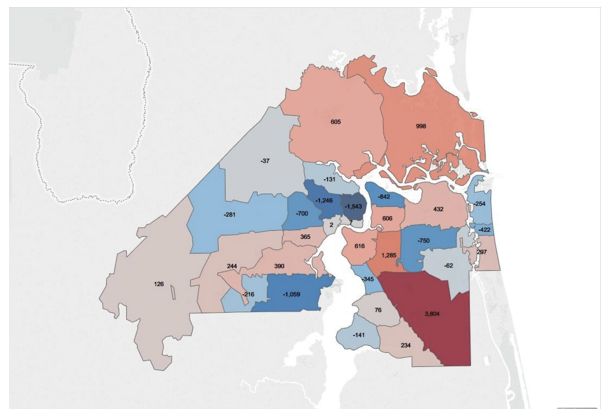 This map depicts both the drastic and minimal shifts in enrollment throughout the district.

The biggest loss in students occurred in 32206, which saw the loss of 1,543 students. This zip code is home to 13 schools, including John Love Elementary, Matthew W. Gilbert Middle, and Andrew Jackson High.

The largest increase in enrollment occurred in 32256, with growth near 4,000 students. This area is home to many of the larger charter schools in Duval, and has seen eight schools in the last 10 years, including five charter schools, as well as the construction and opening of Atlantic Coast High School in 2010. 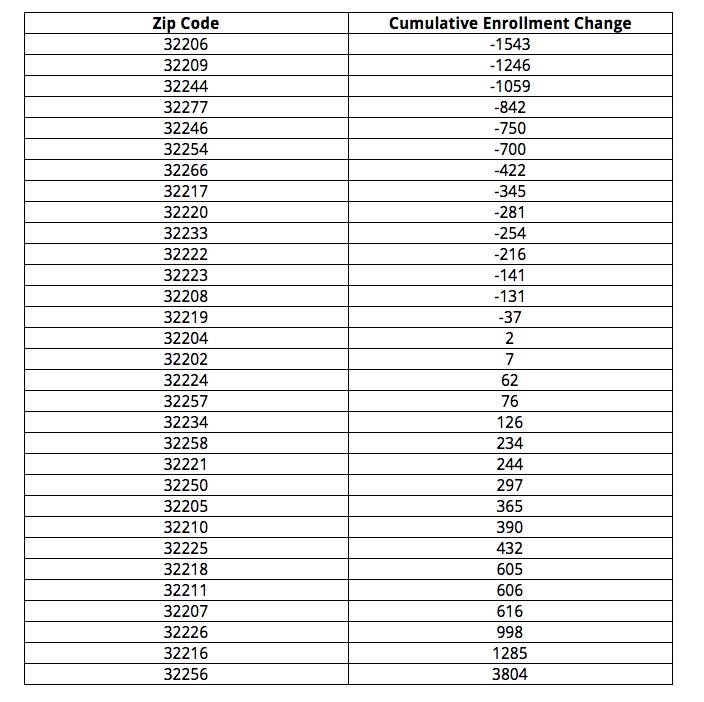 To see the change by zip code from year-to-year, check out the GIF below:

While it is powerful see how Duval County as a whole has changed, what has changed at the school level? On average, each school in the district gained approximately nine students over 10 years. However, this average does not portray the closure of several public and charter schools, and the construction and opening of several new public and charter schools. This number also does not depict the consolidations the District has undertaken to improve utilization rates of facilities.

At the elementary school level, Crystal Springs lost the most students over 10 years, at 311 students, while New Berlin saw an increase of almost 1,200, in part because it was a new school. The majority of middle schools had a negative cumulative change in enrollment during this time period.

To see your school’s change in enrollment, and the enrollment of the schools affected by the proposed boundary changes, click here:

So why is the district seeing such drastic changes in enrollment? There are several possible causes: aging of the student population, changes in family planning, new construction in the north and southeast parts of the county, consolidation of several schools into K – 8 or Academies, boundary changes, and parents exercising school choice.

What this means for proposed program and boundary changes

As mentioned above, the community is currently considering proposed boundary and program changes. Superintendent Vitti says that there are three major rationales behind these changes. First, the Superintendent is seeking to provide solutions for low performance by focusing on early learning and new programs that close the achievement gap, and reduce the number of under-utilized facilities, which leads to inefficient use of funds and facilities. Second, new programs will diversify district offerings in traditional public schools by leveraging taxpayer assets in real estate. Finally, maintaining a status quo approach in terms of enrollment and program offerings will increase the district’s short-term and long-term financial and programmatic vulnerability due to choice options, Priority Status, and increasing enrollment at charters. See Duval County Public Schools working group presentation for a full explanation of the changes.

Another major reason for these shifts in enrollment is that parents are increasingly exercising school choice options. See Duval County Public Schools working group presentation for graphics depicting school choice statistics.  Since the 2011-2012 academic year, on average 7,971 students have been enrolled in charter schools each year, while an average of 12,303 have been enrolled in dedicated magnets, and an average of 8,078 students have received a special transfer. (A special transfer is when a student is enrolled in a school outside of their neighborhood because they have not been admitted to a magnet school and the parent wants to choose another school that has enrollment capacity.) The percentage of students enrolled in neighborhood schools has decreased in the last five years, from 73 percent in 2011-12, to 69 percent in 2014-15.

The bigger picture of this data set shows that the demographic of Duval’s public schools has changed, and is continuing to change. This is an idea that all stakeholders should bear in mind when taking steps to improve our schools and education system. For more information on the changing landscape of school choice — including a comprehensive survey of Duval County parents — go to jaxpef.org/schoolchoice.

For more information about the district's proposed boundary and program changes, and to stay up to date with community conversation, visit www.jaxpef.org/boundarychanges. 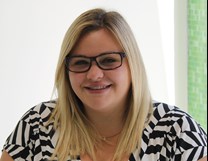