In an effort to connect volunteers wanting to have a direct impact in the lives of our children, the Jacksonville Bar Association’s Young Lawyers Section and the D.W. Perkins Bar Association have partnered with the Jacksonville Public Education Fund and Duval County Public Schools to create a mentoring program that connects students from Ribault High School to young lawyers. The idea grew out of a site visit to The Leadership Academies at Eugene Butler spearheaded by two of our board members - the Honorable Judge Brian Davis and Ricardo Bedoya - to engage members of several of Jacksonville’s Bar associations in learning more about the progress and needs of Duval County Public Schools. A year later, a new partnership is on its way to give high school students an opportunity to learn about the judicial system. This blog shares one of the first organized visits to the Duval County Courthouse.

I spotted the group of young people from blocks away with their navy blue polo shirts and beige khakis as they prepared to walk into the Duval County Courthouse. They were greeted at the door by Chief Judge Mahon and led through security.

On the other side of the metal detectors, they were greeted by a group of lawyers with proud smiles on their faces. Some of the mentors would be meeting their mentees for the very first time today, and they were just as excited to interact with the student they had been paired with as their students were to meet them.

We traveled to the first courtroom to get a lesson on what it takes to be a judge. One Ribault Senior High School senior confidently explained the steps required to get from high school to becoming a judge.

The students had an opportunity to meet other local judges in the room, including the Honorable Russell Healey, who recently ruled in the high profile murder case involving Michael Dunn and Jordan Davis. One student wanted to know how he felt while giving the verdict. He candidly responded, “Nervous.”

This moment in addition to many others that morning gave the Ribault scholars a realistic yet human perspective of what it takes to become a judge and what life is like once you have reached this goal. The judges shared the variety of paths they took to earning their gavels and robes. 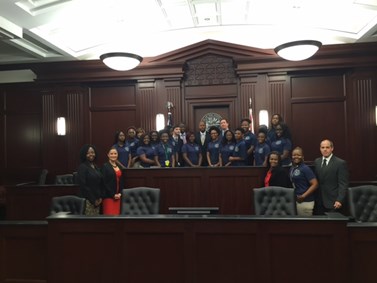 The tour culminated with a mock trial for the students. The lead defense attorney and the prosecutor were prepared with their opening arguments, witnesses, and thought-out line of questioning. Mentors watched from the back of the courtroom as their mentees took on this challenge. Though Judge Lester Bass ruled in favor of the defense that morning, the real winners were all dressed in their navy blue and khaki uniform with proud smiles flashed across their faces.